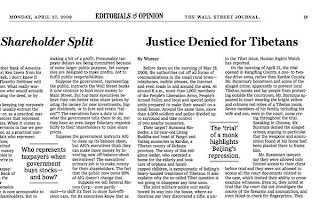 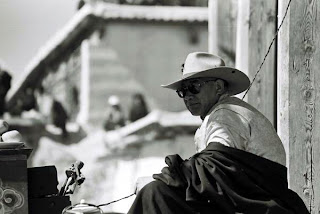 Before dawn on the morning of May 18, 2008, the authorities cut off all forms of communications in the small rural town -- telephones, mobile phones, the Internet and even roads in and around the area. At around 6 a.m., more than 1,000 members of the People's Liberation Army, People's Armed Police and local and special police units prepared to make their assault on a small house. Around the same time, more than 4,000 soldiers and police divided up to surround and take control of two nearby nunneries.

Their target? Buramna Rinpoche, a 52-year-old Living Buddha and head of Pangri and Yatseg nunneries in Kardze, a Tibetan county of Sichuan province. The story of this religious leader, who operated a home for the elderly and took care of orphans and handicapped children, is symptomatic of Beijing's heavy-handed treatment of Tibetans. It also explains why the so-called Tibet question is not going to disappear any time soon.

The joint military-police unit easily forced its way into the house, where authorities say they discovered a rifle, a pistol and more than 100 rounds of ammunition hidden under a bed in the living room. The monk was arrested under charges of possessing illegal firearms and ammunition. He was also later charged with the illegal occupation of state land.

The arrest more likely is connected to an incident that had occurred four days earlier, when 80 nuns from the Pangri and Yatseg nunneries took to the streets to carry out a peaceful protest against the Chinese government's "patriotic education" campaign, which pressured Tibetans to denounce the Dalai Lama, Tibet's spiritual leader who now lives in exile in India. These religious women peacefully handed out leaflets and shouted slogans criticizing the campaign, but according to an eyewitness with whom I've spoken several thousand military and police were mobilized to deal with the protest, in which many of the women were severely beaten and arrested.

The authorities apparently believed that the nuns had acted upon the instructions of Mr. Buramna, as he is responsible for both nunneries. So from that day on, his every movement was monitored.

Mr. Buramna was transferred after his arrest to the Luhuo County Detention Center. There, according to his lawyer, he was handcuffed to a railing for four days and kept awake day and night by two guards. During these four days, he says he was tortured and police threatened to arrest his wife and son if he did not sign a confession to possessing illegal weapons. Under such duress, Mr. Buramna signed and made a thumbprint on a confession admitting to the charges. He later recanted this "confession" in court.

Mr. Buramna's family hired two Chinese lawyers from Beijing to defend him. The two, Li Fangping and Jiang Tianyong, are well-known human rights defenders. Mr. Jiang was one of 21 Chinese lawyers who signed a public statement on April 1, 2008, offering to provide legal defense to Tibetans who were arrested in connection with protests that broke out in March 2008 in Tibetan areas throughout China. The government has threatened to close the law firms, or revoke individual lawyers' licenses, if these lawyers involve themselves in the Tibet issue, Human Rights Watch has reported.

On the morning of April 21, the trial opened in Kangding County, a one- to two-day drive away, rather than Kardze County, Mr. Buramna's hometown and scene of the alleged crime, apparently to prevent local Tibetan monks and lay people from protesting outside the courtroom. Mr. Buramna appeared in court wearing the bright yellow and crimson red robes of a Tibetan monk. Seven members of his family, including his wife and son, were in the court, some crying throughout the trial. Speaking in Chinese, Mr. Buramna denied the alleged crimes, arguing in particular that the weapons and ammunition found at his home had been planted there to frame him.

Mr. Buramna's lawyers say they were allowed only limited access to their client before trial and they were not allowed to access all the court documents related to the case, which limited their ability to cross-examine witnesses. Even so, they noted at trial that the court did not investigate the source of the firearms and ammunition, and even failed to check for fingerprints. They argued that the monk's living room was a public place that saw a large number of people coming and going, and that anyone could have hidden the weapons there. They stated further that an examination of documents related to the land used for the elderly people's home, which the government said was occupied illegally, showed the site was not state-owned.

The lawyers repeated the monk's assertion that he was tortured for four days and was forced to sign the confession under duress, which would make it invalid for use as a basis for conviction. No verdict was handed down at the end of the hearing, the court saying it would announce the sentence at another date. If convicted, Mr. Buramna will face a prison term of between five and 15 years.

Yet Beijing would be wrong to think that will be the end of the matter. The incident has led to widespread anger among Tibetans in the area. On the morning of Mr. Buramna's arrest, a number of monks and ordinary people in Kardze held a demonstration demanding his release; they were surrounded by the police and beaten, according to the same witness who saw the nuns' original protest. The elderly residents in his welfare institution also tried to protest, but according to the same source, their home was surrounded by the police. In June, there were more protests seeking his release, and several people were beaten and arrested.

Mr. Buramna's trial is the first of a major religious leader to be held since last year's disturbances in Tibetan areas. It's a sad commentary on the situation that one can say that at least this trial is being held in public. But such trials will not bring stability to the area. The nuns whose protest seems to have sparked this case acted spontaneously, and their protest had nothing to do with Mr. Buramna. They, and all Tibetans, want justice in their region. Putting Mr. Buramna in jail will only increase that thirst.

Ms. Woeser, a Tibetan poet, writer and blogger, lives in Beijing. This article was translated from the Chinese by Paul Mooney.
发帖者 Tsering Woeser 时间： 11:48