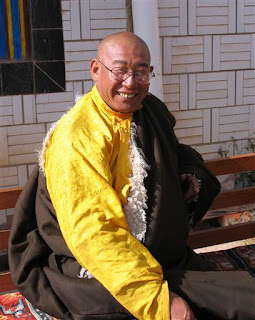 
BEIJING — The abbot of two convents in a Tibetan region of western China is expected to be sentenced next Tuesday on charges of weapons possession and embezzlement, according to his two lawyers. The abbot is believed to be the most senior religious figure put on trial following waves of detentions aimed at suppressing a widespread Tibetan uprising last year.

The trial, which began Tuesday, has caused considerable concern among Tibetans and Chinese human rights lawyers. The abbot, Phurbu Tsering Rinpoche, 51, is the leader of two convents in the restive area of Ganze in Sichuan Province. He also runs a home for the elderly in the city of Kangding. He is considered a tulku by Tibetans and called a living Buddha in Chinese — a especially revered figure who is believed to be the essence of a prominent religious leader.

Phurbu Tsering Rinpoche was detained by security forces on May 18, four days after a protest by more than 80 nuns from his convents. Prosecutors say the police found a pistol and about 130 bullets in his living room, said one of the abbot’s lawyers, Jiang Tianyong. The court also charged the abbot with embezzlement after prosecutors accused him of trying to illegally take possession of the home for the elderly.

If convicted on both charges, as is expected, the abbot could be sentenced to 15 years in prison, said Mr. Jiang, who traveled with a colleague, Li Fangping, from Beijing last week to take on the case. Both are prominent human rights lawyers. The Chinese government has tried to discourage ethnic Han Chinese lawyers from representing Tibetans arrested after the uprising last year.

Mr. Jiang said the charges were unfounded and were motivated by politics.

“There’s a lack of evidence on the weapons charge, and the embezzlement charge is ridiculous,” he said. “The living Buddha predicted that the government would arrest him because some nuns from his convents took to the streets to protest.”

Calls to the two courts in Ganze that are involved in the case went unanswered late Friday afternoon.

The protest by the nuns was one of many that took place in Tibetan regions after ethnic rioting by Tibetans erupted in Lhasa in March 2008. The Chinese government sent security forces across western China to crack down on the protests. In Ganze, the nuns at the convents were told to sign papers denouncing the Dalai Lama, the exiled Tibetan spiritual leader, but the nuns refused and marched in the streets instead, said Woeser, a prominent Tibetan blogger who has written about the case.

At least a dozen of the nuns have been sentenced for unknown crimes, and six are still being detained, Woeser said in an interview.

She added that the case of Phurbu Tsering Rinpoche is unique.

“Since the Lhasa incident last March, this is the first trial of a living Buddha,” she said. “The authorities want to scare other living Buddhas by doing this, but I think that’s a mistake. Capturing this kind of living Buddha will cause a place like this to never be at peace again.”

The Tibetan issue is one of the most intractable political and security problems for China. Many Tibetans resent rule by the Chinese, and the Chinese government sent thousands of troops into Tibetan areas this winter and spring to prevent any protests during the 50th anniversary of a failed uprising against the Chinese. http://www.nytimes.com/2009/03/05/world/asia/05tibet.html?scp=3&sq=edward%20wong%20maqu&st=cse

Mr. Jiang was one of 21 Han Chinese lawyers who signed a petition last year announcing that the lawyers would help defend Tibetans. Government officials met with the lawyers and told them not to take on any cases, Mr. Jiang said.

“We hoped that this kind of issue could be solved through law, through legal procedures,” he said. “This is beneficial to the relationship between Tibetans and Han Chinese, because they’re citizens of the People’s Republic of China and they’re entitled to be protected by the law.”

In recent weeks, there has been a spate of sentences related to the 2008 uprising. On Tuesday, a court sentenced three Tibetans convicted of setting or helping set a deadly fire during the rioting in Lhasa.