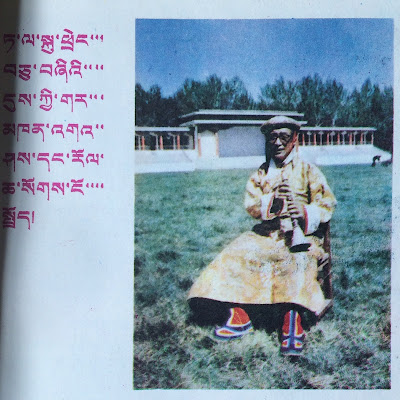 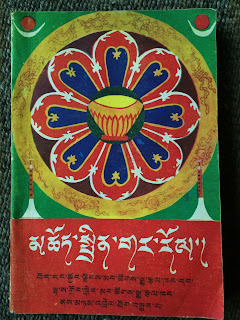 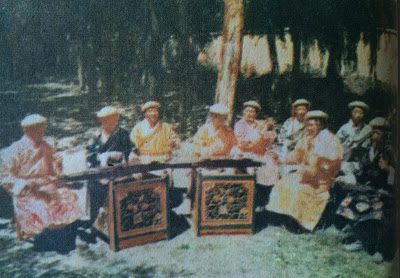 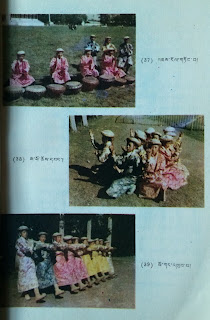 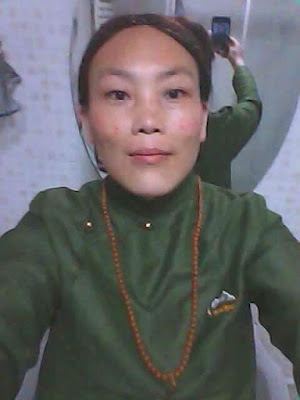 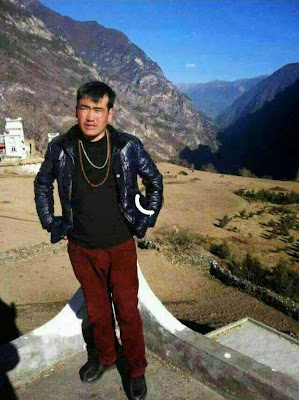 'Aren't They The Lucky Ones?'

Writer Tsering Woeser has used her blog "Invisible Tibet," together with her poetry, historical research, and social media platforms like Twitter, to give voice to millions of ethnic Tibetans who are prevented from expressing themselves to the outside world by government curbs on information. In a recent commentary, she says Tibetans shouldn't play into mainstream fantasies about their own heritage:

Recently, a young Tibetan couple's wedding photos were labeled with all kinds of epithets, such as "dazzling the nation," "beyond dogma," "moving into secularism," and other eye-catching headlines, going viral on the Chinese Internet.

Then, even the Chinese official news agency Xinhua reported the wedding, calling it an example of a  modern Tibetan wedding of the post-1980 generation, with the groom on one knee, holding a ring to propose, while the bride cried with happiness. "So with the zeitgeist," [Xinhua proclaimed.]

They are Tibetans who come from largely agricultural regions, with the highest level of penetration of Han Chinese culture.

From these reports, we learn that Gerong Phuntsok graduated from Beijing's Central Nationalities University and runs an advertising agency in Chengdu, while Dawa Drolma studied music at the Ngaba Teachers' College and now runs an online jewelry business.

Their wedding album can be sorted into two different types of photos: images showing them as "modern Tibetans" wearing suits, skirts, and shades, and a wide-brimmed hat, drinking coffee and wine, running, listening to rock music, driving a sports car or flying in a helicopter, just like the children of so many Hollywood stars, cutting a dash in Chinese and foreign cities on holiday, looking no different from the models in today's Chinese fashion magazines.

They are fit for display in the window of a wedding photography shop.

In the other group are the "traditional Tibetan" photos, in which they appear in so-called national dress, wearing prayer beads, hands clasped and heads bowed as if in prolonged devotion. These are taken atop the Potala Palace, or in Jokhang temple, or spinning wool outside a yurt with a yak on the grasslands. But they still look like models, and they seem to be performing.

These, too, are fit for display in a bridal boutique window.

If such a wedding album is just made so people can have photos of themselves to hang on the wall on share among a small circle of friends, there is nothing wrong with it. If it is used for commercial publicity, it is a different matter, and if it is used for political propaganda, then it is worthy of comment.

But these young Tibetans' wedding album has gone viral, and not just in China. Even the BBC and the New Yorker picked up on it.

It seems the photos are being read as a demonstration of the modernization of the lives of young Tibetans who are different from their forebears, who possess a dazzling modern style to rival their peers, but who also harbor feelings of nostalgia and a sense of tradition.

This makes me want to laugh. The fact is that this young Tibetan couple has no real experience of pilgrimage or herding and the fact that, for all their traditional appearances in the photos, they are still the petty bourgeoisie of today's China.

Such fantasy Tibetans are to be found in the minds of Chinese Tibet enthusiasts, and can often be found wearing Tibetan clothing against the backdrop of the Potala Palace and Barkhor bazaar and various temples, providing wedding photos for Han Chinese tourists ... who pose in traditional Tibetan stage costumes or bridal gowns for commercial photographers.

Gerong Phuntsok and Dawa Drolma are doing no more than imitating them.

It goes like this: Chinese Tibet enthusiasts and supermodels dress up as Tibetans, then young Tibetans imitate the Chinese and the supermodels imitating them. There is only one word for this: pseudery.

Dressing up in traditional, ethnic minority clothes against the backdrop of the Potala Palace, temples and prayer wheels, or pastoral nomadic scenes may seem like you're coming home to something, but it's all an act; the appearance of coming home. It's so staged.

Tibetans can see right through this sort of act, but non-Tibetans will be dazzled by it. It caters to a lot of things; to Chinese people's idea of modernization, to their misunderstanding of Tibetans.

For young Tibetans to dress up in these costumes, far from being an expression of their Tibetan identity, is in my view a form of self-negation.

This negation turns them into passive objects in an increasingly mainstream and "civilized" world which has secularism as its focus. There is no true expression to be found here, nor any true self-acceptance or identity.

Still less is there any sense of an authentic self or a modern Tibetan identity. It's grotesque, like a painting of a tiger based on a photo of a cat.

Such images are of "otherized" Tibetans: a pale reflection of oneself in the eyes of others. They have little new to offer, other than being the empty productions of the current culture among young Chinese people and among young Tibetans who imitate Han culture and its imitation of what looks like Western culture, but is actually Chinese.

The big irony lies here: Can this young Tibetan couple get into the Potala Palace to pray? As Tibetans whose hometowns lie outside of the Tibet Autonomous Region, can they go to Lhasa without having to hand in their ID cards to the police? Can they stay in guesthouses not approved by police?

Can these young Tibetans leave the country to go on holiday whenever they want? Clearly they have passports, something that 99 percent of Tibetans can't get.

Aren't they the lucky ones?

They should know that the deputy chairman of the Tibet Autonomous Region's writers' association recently tweeted: "Why can't we Tibetans go on overseas trips? Why have our passports been confiscated by the authorities for the past three years? Why don't they give them back to us? Everyone else in China gets to go overseas on holiday, why not Tibetans?

Perhaps this couple were able to get passports because their hometowns are outside the Tibetan region, but I happen to know that it's very hard for Tibetans to get passports, even if they live in Chengdu [the Sichuan provincial capital].

All this is intentionally or unintentionally ignored by the official Chinese media, and the two have already been portrayed as the Tibetan representatives of modernization, living the happy life of their choice and enjoying various rights that enable them to realize their dreams.

No wonder so many Chinese people online are envious.

But there is a coincidence here, and it's a sad one, noted by The New Yorker. On the day that this wedding album went viral, a 47-year-old Tibetan nun set fire to herself on the streets of Kardze town in the Kardze Tibetan Autonomous Prefecture, burning to death on the spot.

She became the 142nd Tibetan and the 23rd Tibetan woman to succeed in self-immolating as a form of protest at the Chinese government.

There have been so many self-immolations, of old and young, monks, nomads, and farmers.

And at least half of them come from the same hometowns as this happy young Tibetan couple in the photo album.

Quite a few of them are young, too, about the same age as the couple in the photographs.

Maybe some of those photos of them on the grasslands, on horseback, or in front of pastoral tents in some Xanadu idyll were taken near the homes of some of those people who self-immolated.

To use the language that is current in China, self-immolation is a dark, negative force, evil, and related to Tibetan independence, and must be snuffed out.

The positive energy lies with this young bride and groom, who must be crowned with the halo of "modernization," feted, and brought into the light.

In a political environment where there is no true personal freedom and no true psychological freedom, the label "modern" rings fake and empty.

Secularism isn't the same as modernism, and it's not a panacea for the Tibet issue, nor a defense against it.

This has been a story about authenticity and parody. The real thing would suffice, not some image of success created to boost sales.

The young Tibetan couple may have written "A story about the two of us" on their album, but in fact all they have done is transplanted someone else's story into their own lives.

But they did actually get married, and for that, I wish them the greatest happiness. 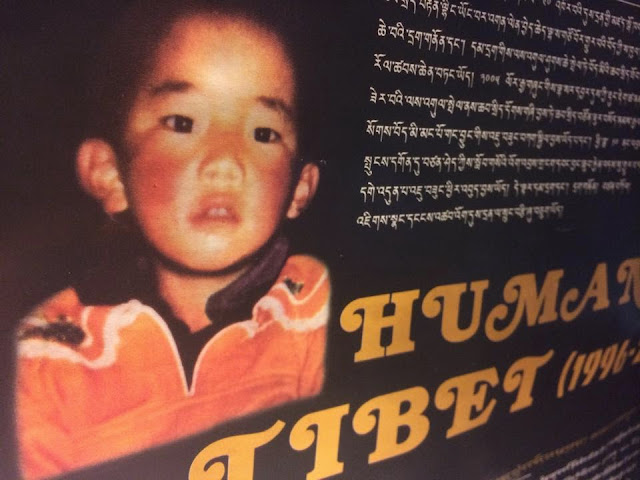 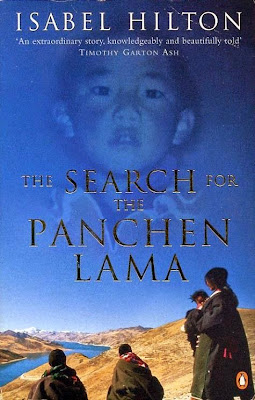 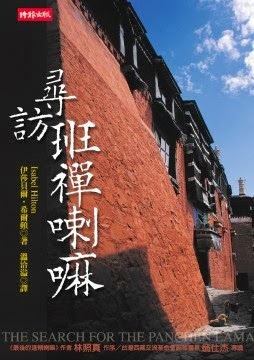 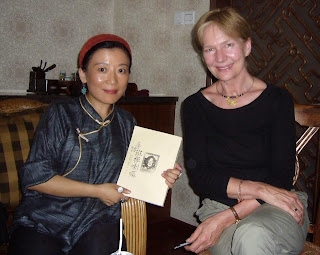