An interview with Tsering Woeser 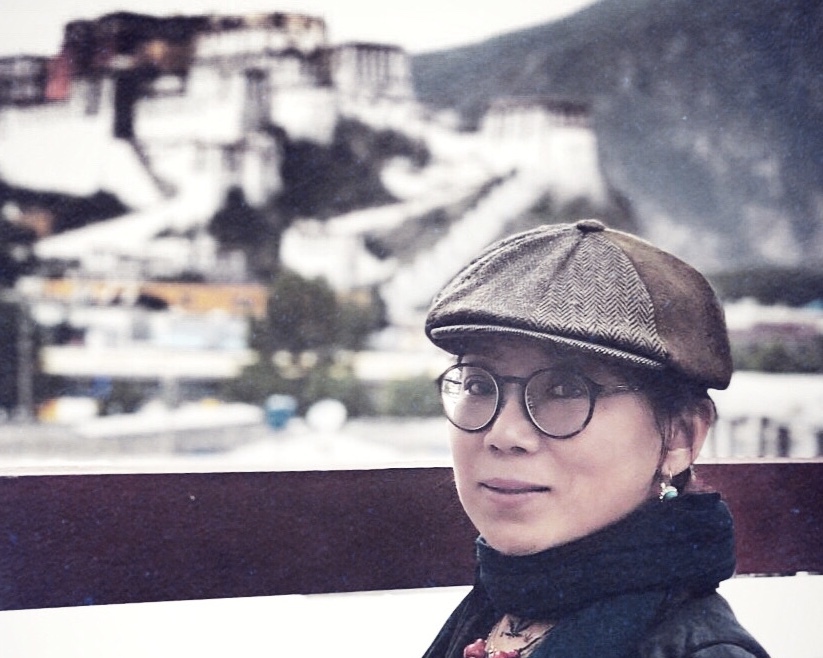 Born in Lhasa in the summer of 1966, amid the turbulence at the outset of the Cultural Revolution, Tsering Woeser’s mixed Sino-Tibetan origins and early education in Mandarin prefigured the poet’s estrangement from her ancestral land. Her lifelong exile was first spiritual, and then, inevitably, material. Unlike many of her fellow uprooted Tibetans, the present locus of her exile is Beijing, where she is largely confined to a heavily surveilled high-rise on the outskirts of the city’s inner circle. The view from her window stretches to the chaotic tangle of highways and flyovers of the outer ring roads, foregrounded by a forest of cranes and skyscrapers. Yet the apartment itself, furnished in the Tibetan style, featuring an agglomeration of Tibetan Buddhist objects and a small personal shrine, provides tranquil refuge from the curtain of smog shrouding the megalopolis that hems Woeser in.For Woeser, the ultimate refuge, however, is her wide-ranging writing practice, comprising poetry, essays, blogging, and documentary narratives of modern Tibetan history. Though her mother tongue is Tibetan and she grew up speaking a Kham dialect, Woeser learned to read and write only in Chinese. During the economic boom of the nineties, she had the opportunity to publish her works on the Chinese market but ultimately chose not to comply with the strictures of the official system.Her first poetry collection, Tibet Above, was published in 1999 by the Tibetan People’s Publishing House of Qinghai Province. Her second book, the essay collection Notes on Tibet, however, skirted more traditional publishing channels and was carried by an influential liberal publisher in Guangzhou controversial within the Party. It was banned as soon as the authorities in Lhasa caught wind of it. This proved to be a pivotal moment for Woeser, galvanizing her desire to write more openly about the situation in Tibet. The first thing she focused on after becoming a “dissident” was the heavily
tabooed subject of the Cultural Revolution in Tibet. In 2006, she published Forbidden Memory: Tibet during the Cultural Revolution, a documentary treatment of personal photographic material left behind by her father (a high-ranking officer in the People’s Liberation Army), and Memory of Tibet, a collection of oral histories. A prolific blogger and essayist, Woeser remains a poet at heart. Rebel Under the Burning Sun, a new collection written during the author’s last visit to Lhasa in spring and summer 2018, is forthcoming in English, translated by Ian Boyden. Woeser is the recipient of numerous honors recognizing her literary and humanitarian achievements, among them the U.S. Secretary of State’s International Women of Courage Award (2013), the International Women’s Media Foundation’s Courage in Journalism Award (2010), and the Norwegian Authors’ Union’s Freedom of Expression Prize (2007).
—Kamila Hladíková
How was your understanding of Tibet shaped, and what compelled you to begin unearthing its “forbidden memory”?I am three-quarters Tibetan and one-quarter Han Chinese. I was born in Lhasa. I have spent about two-thirds of my life in Tibet, partly in Lhasa and partly in the eastern area of Kham, and only one-third in Chinese cities, first Chengdu and now Beijing.  For a long time, during my educational years, I did not distinguish between Tibetan and Han national identities. We all studied in Chinese and everybody was speaking Mandarin. I have not had any Tibetan education. At the time, Tibetan language education was not established in any part of Tibet
I left Lhasa when I was four years old and came back when I was twenty-four. Only then did I realize that I had been completely Sinicized and become a stranger in my own homeland. My identity was confused. At one time I thought that I had solved this question: I convinced myself that my identity as a poet transcended everything, and that national identity was not important. In fact, I had lost myself, and from my current perspective, the process of searching for, resisting, and finally accepting myself really took me too long.Part of my understanding of Tibet comes from reading. In the earliest phase, I read Thubten Jigme Norbu’s Tibet: Its History, Religion and People (co-written with Colin Turnbull), In Exile from the Land of Snows by the American journalist John F. Avedon, and His Holiness the Dalai Lama’s My Land and My People and Freedom in Exile, all in Chinese translation. The interesting fact is that the first two books were published officially in Lhasa in the 1980s. The authorities allowed them to be translated as material intended “for critical evaluation” but did not expect them to become so popular and they were banned very quickly.Another part comes from my life in Lhasa and my extensive travels throughout Tibet. As I have written in my poetry collection The White of the Land of Snows: “Having experienced many changes during my life, bathing in the exceptionally splendid sunlight of Tibet, unceasing and resistant to the wind of changes, I gradually started to experience and truly appreciate the compassion and wisdom of Tibetan Buddhism. Gradually, I was able to see and hear the glory and the suffering embedded in Tibetan history and presence . . . that all gave me the sense of a mission: I wanted to tell the world about the secrets of Tibet.”

The word “empty” (空, pron. kong, that is translated as “absent” in the poem) can symbolize many things, from entire historical eras to something as small as a single tiny figure on a wall painting in a Buddhist shrine. It is a blank space that, just as you said, stands in for all the parts of reality and history that have been censored, wiped out, made absent. Filling these blank spaces is a kind of rejection, resistance, non-collaboration, an attempt at restoring eternal presence.As a writer whose work centers on these “invisible” things, I myself have become an object that has been made “absent”. Like many Tibetans who have been swallowed by this unnatural “emptiness” imposed by our Others, I have my own means of resisting it. I wrote a poem on the occasion of His Holiness the Dalai Lama’s eighty-third birthday. Perhaps it can answer your question about whether Tibetans “hear” the events and people made “absent”:


And all the lamas coming with you will inhabit the former Khamtsän. “We are still waiting, waiting, and waiting . . . Many people have meanwhile departed for their long journey to rebirth.Our Gönpo originally had His own palace and monastery,Had His people and land, everything here used to belong to Him,The present as well as future lives of every person all belong to Him.”An old man of Your age, holding my hand in the sweet-tea houseTold me this in a low voice, using honorific language, his eyes full of tears. “Kundun, see You in Lhasa!”That winter, a young man from LhasaTravelled alone to Bodhgaya to take part in the Kalachakra initiation,And as he slowly walked toward the old man in purple robes,He cried out, his palms put together, hot tears running down his face. Another young man, from Amdo,Before departing for his doctoral studies in the West,Tattooed several Tibetan numbers on his arm,The total number of years of His Holiness in this world.

Indeed, you can “hear it.” The people living in an empty place can rely only on their “faith”—it is a soundless sound, which allows you to hear the stories of people and events that were “made absent.”

Kamila Hladíková (b. 1978, Prague) is an assistant professor of Chinese literature at Palacky University in Olomouc, Czech Republic, teaching both traditional and modern Chinese literature and Sinophone cinema. She received her Ph.D. in sinology from Charles University, Prague, in 2011. In her doctoral thesis, she focused on the representations of Tibet in Chinese and Tibetan literature from the 1980s and examined questions of identity in modern Tibetan short stories (The Exotic Other and Negotiation of Tibetan Self: Representation of Tibet in Chinese and Tibetan Literature of the 1980s, Palacky University Press, 2013). She has published an article on Tibet-related cinema, “Shangri-la Deconstructed: Representation of Tibet in Pema Tseden’s Films” (Archiv orientální, volume 84, no. 2, 2016) and a chapter in the book Tibetan Subjectivities on the Global Stage (“A Tibetan Heart in a Chinese Mouth: Tsering Woeser’s Notes on Tibet,” Lexington Books, 2018). She has translated works of Chinese and Sinophone Tibetan literature. For example, she co-edited and co-translated a Czech-language anthology of short stories from Tibet, Vábení Kailásu (The Lure of Kailash, DharmaGaia, 2005). Her Czech translation of Tsering Woeser’s 西藏笔记 (Notes on Tibet, Verzone) was published in 2015.