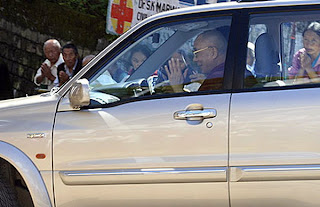 Dalai Lama hospitalised with abdominal pains: doctor
AFP[Friday, October 10, 2008 00:37]
NEW DELHI — The Dalai Lama has been hospitalised due to abdominal pain and could undergo surgery on Friday, a senior doctor told AFP, but his spokesman insisted that he was only undergoing "routine tests."

The spiritual leader was admitted to a state-run New Delhi hospital on Thursday following media reports that abdominal pains for which he had spent four days in a Mumbai hospital in August had recurred.

A senior doctor at New Delhi's Sir Ganga Ram Hospital, who did not wish to be identified, told AFP that the Dalai Lama, a former Nobel peace Prize winner, had been hospitalised.

"He was admitted when he complained of abdominal pain and now chances are that the Dalai Lama will be operated upon, most probably tomorrow (Friday)," the doctor said.

Hospital chief Nalini Kaul declined to comment on the Dalai Lama's health or what treatment he would receive but the Press Trust of India, quoting unnamed sources, also said the monk was likely to be operated upon on Friday.

However, a spokesman for the Dalai Lama dismissed the report of surgery and said that the spiritual leader was undergoing "routine tests."

The Buddhist monk had been scheduled to return to his home-in-exile in northern India on Thursday, but spokesman Tenzin Takhla told AFP that the 73-year-old would now remain in hospital at least until Saturday.

"There is nothing to worry about as His Holiness is undergoing routine tests for which he had to be hospitalised," Takhla said, rejecting the reports of surgery.

The Dalai Lama was hospitalized in New Delhi early Friday, days after a medical checkup cleared him to resume foreign travel, AP reported. Chhime R. Chhoekyapa, declined to provide further details, including when the surgery would take place, saying only "a gallstone will be removed."

His Holiness the Dalai Lama leaves Dharamshala, the headquarters of the Tibetan government-in-exile in northern India, for a follow-up medical check up in New Delhi, Oct 6, 2008/file photo/phayul/Tenzin Dasel
Dharamshala October 10: Doctors successfully removed gallstones from His Holiness the Dalai Lama in a surgery carried out earlier today at Delhi’s Sir Ganga Ram hospital.

A statement posted on the official website of the Tibetan leader said, “His Holiness the Dalai Lama underwent a successful removal of gallstones this morning at Sir Ganga Ram Hospital in New Delhi, which is a simple routine procedure. He will rest a few days in New Delhi before returning to Dharamsala.”

His schedules, including travel programmes, remain unchanged, the statement said.

"He (the Dalai Lama) is going to undergo the removal of gall stones, which I believe is a simple routine procedure," the Tibetan leader's secretary Chhime R. Chhoekyappa told Reuters before the surgery, "Otherwise his health is fine. It is just to remove the gallstones, nothing else."

In August, the 73-year-old Dalai Lama was admitted to a Mumbai hospital and underwent tests for abdominal discomfort. His aides said then that he was in good condition but that doctors had advised him to cancel a planned trip to Europe and rest, saying he was suffering from exhaustion.

The Dalai Lama normally spends several months a year traveling the world to teach Buddhism and highlight the Tibetans' struggle for greater freedom in China.

The Dalai Lama arrived in the Indian capital Monday from Dharmsala, the north Indian hill town where he set up his government-in-exile after fleeing Tibet in 1959 following a failed uprising against Chinese rule. He was originally scheduled to be back in Dharmsala on Thursday.

After a March outbreak of violence in Tibet, China stepped up its campaign to vilify the Dalai Lama, blaming him for the unrest, which Beijing says was part of a campaign to split the Himalayan region from the rest of China.

The Dalai Lama has denied the allegations, saying he is only seeking greater autonomy for Tibet to protect its unique Buddhist culture.
发帖者 Tsering Woeser 时间： 17:41