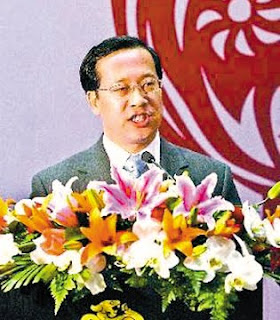 Talking with the Dalai Lama: How serious is China?
与达赖喇嘛会谈：中国诚意几何？

It is hard to tell whether their accuracy is lost in the translation or not but it is always amusing to read the way China frames its public pronouncements on Tibet in general and the Dalai Lama in particular.

As the long-stalled talks between Beijing and the Dalai Lama's special envoys begin, Chinese foreign ministry spokesman Ma Zhaoxu has one piece of advice for the 75-year-old Tibetan leader: "We hope the Dalai Lama will cherish this opportunity and respond positively to the requests of the central government."

The choice of the word "cherish" is unmistakably made to underscore the patronizing tone of the statement. It is almost as if a stern parent is telling an errant child after a timeout: "Now that you have learned your lesson, here, cherish this lollipop." The idea that someone who has been forced to spend over five decades of his life away from homeland should be grateful that those who caused him to leave may occasionally condescend to talk to his representatives would have been amusing but for the underlying seriousness of the issue.

By its very definition people "cherish" things which are either rare or special or both. It is true that the talks between China and the Dalai Lama are rare, but whether they are special is a matter of opinion. For Beijing, the very fact that it deigns it fit to even engage him in a dialogue at all, even if it is about laying the groundwork for future dialogues, is special in itself. There is always a barely concealed dismissive tone when it has anything to say about the Dalai Lama and his efforts to reach out for a negotiated settlement.

When the talks broke down in November 2008, although there was no specific reason given, there was a widely held belief that the Chinese government was unhappy at the Tibetan demand for autonomy and the accompanying assertion that it was not in conflict with the Chinese constitution. As always this time around too the Dalai Lama's office is taking a tactful approach. His spokesman Tenzin Takhla was quoted as saying that the talks are an "important process of trying to find a mutually agreed solution."

Care was taken by Beijing to point out that the 10th round of talks since 2002 were sought by the Dalai Lama, lest it be misconstrued by anyone that China felt obliged to resume them. Beyond the finely tuned choreography of such talks, it is not known what the specific agenda of the latest talks is going to be.

There has been nothing to indicate that the Obama administration has specifically requested China to resume the dialogue. In what was widely seen as a move aimed at pleasing China, President Barack Obama chose not to meet the Dalai Lama weeks before his first state visit to Beijing in November last year. It was then believed that Washington could leverage this gesture to restart the dialogue between Beijing and the Dalai Lama.

A little over two months after that visit the resumption of the dialogue may in part be interpreted as a consequence of that. However, considering that the last nine rounds of talks in eight years ended without anything tangible being achieved, it is anybody's guess what the tenth round could produce. One indication of how flippant the mood in China gets when it comes to Tibet and the Dalai Lama was a piece titled 'A look at the Dalai Lama's ridiculous Indian heart' in the People's Daily Online on January 22. It was apparently prompted by some reports that the Dalai Lama might consider becoming an Indian citizen, something which has no official sanctity.

"According to reports on January 16, 2010, during the opening ceremony of the International Buddhist Conference in Gujarat State, India, the Dalai Lama remarked that due to the fact that he was from purely Tibetan parents, he was Tibetan in appearance, but an Indian in spirituality. Thus, his comments and ideas originate from Indian traditions," the site wrote.