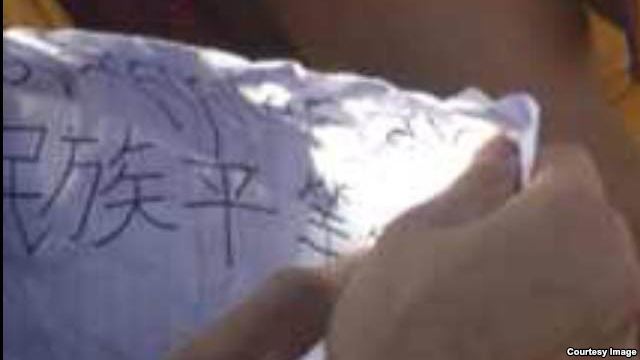 [All links lead to Chinese-language websites unless otherwise noted.]
On November 24, 2012, the number of self-immolations since February 2009 committed by Tibetans in protest of Chinese rule of the Tibet Autonomous Region reached [en] 79 since February 2009. Even though United Nations human rights chief has finally spoken out and urged [en] the Chinese government to address the grievances of Tibetans, discussion about the religious and cultural oppression of Tibet as well as the the rash of self-immolations by Tibetans continues to be banned in the online and offline public sphere by thePropaganda Department of the Chinese Communist Party (CCP) [en] because of its political sensitive nature.
Dissent writer Woser, who reports on the human rights situation in Tibet, hascollected 19 last wills and testaments of Tibetans who self-immolated to help people understand their grievances. There is no freedom in Tibet, His Holiness Dalai Lama is forbidden to return home. Panchen Lama [the second highest ranking Lama after the Dalai Lama] is in prison. Numerous Tibetan heroes have made the sacrifice of self-immolation. I don't want to live anymore, there is no meaning in living… We are the son of Snow Lion, the offspring of red face Tibetans. Please remember the dignity of Snow mountain.

2. Nyankar Tashi (娘尕扎西), 24 years old, self-immolated on November 24, 2012 in Tongren County, Qinghai Province. He left a letter to Dalai and Panchen Lama as well as to six million Tibetans:

Tibet needs freedom and independence. Release Panchen and let Dalai return home. I self-immolate to protest against the Chinese government! Father, please don't be disheartened because of me. I follow the Buddha and Goodness. My wish is that six million Tibetans will learn their mother tongue, wear Tibetan clothes and be united. Tingzin's portrait. Image from Woeser.
3. Tingzin (丹珍措), 23-year-old herdswoman living with her parents and her six-year-old son, self-immolated on November 7, 2012 before the 18th National Chinese Communist Party Congress in Tongren Province. She left her last words to her father:

Father, being a Tibetan is so difficult. We can't even say our prayer to Dalai Lama's portrait. We have no freedom at all…

4. Lhamo Kyap (拉莫嘉), a herdsman in his 20s with two young daughters, self-immolated on October 20, 2012 near Bora Temple in Xiahe County, Gansu Province. A Tibetan friend of Lhamo recorded the details of a conversation he had with him on the date of Lhamo's self-immolation:

Lhamo Kyap asked his close friend in a phone conversation if he could pick him up at Bora Temple. His friend said that he did not have his motorbike with him and might not be able to help. Lhamo said, it's OK, today you may hear news. He asked if his friend knew when exactly the 18th Congress of the CCP would take place. He sighed, China does not allow us to live in peace. Then he hung up the phone.

5. Dhondup (頓珠), a 61-year-old herdsman, self-immolated on October 22, 2012 at Labrang Monastery in Xiahe County, Gansu Province. According to Voice of Tibet:

6. Gudup (古珠), a 43-year-old Tibetan writer, self-immolated on October 4, 2012 in Biru County, Tibet. He left his last words in an update to his QQ account, a popular Chinese social networking site. Below is an excerpt:

His Holiness Dalai Lama advocates for a non-violent middle-way policy for the right to Tibetan autonomy. Six million Tibetans have been following His Holiness' teaching. But the CCP shows no support. Instead, they arrested and tortured those who demand Tibetan's rights. They defame Dalai Lama and when anyone does not recognize Tibet as part of China, they will disappear or be assassinated. They don't care about Tibetans and in order to let the world know about the real situation in Tibet, we have to radicalize our peaceful action, voice out Tibetan independence by lighting up our bodies.

7-8. Tenzin Kedhup (丹增克珠), a 24-year-old herdsman and a former monk. Ngawang Norphel (阿旺诺培), 22 years old. They self-immolated together with the Tibetan national flag in Chindu County, Qinghai Province. They recorded their last words together:

We do not have the ability to help Tibetan's religion and culture. We do not have the economic means to help other Tibetans. For the sake of our Tibetan race, in particular for the return of His Holiness Dalai Lama to Tibet, we choose self-immolation. We want to tell all the Tibetan youth, swear to yourself, never fight against each other, among Tibetans, we have to be united and protect our race.

9. Tamding That (旦正塔), a 64-year-old herdsman, self-immolated at Jainca County outside a military office in Qinghai Province. He left a short note:

Rely on three treasures [Buddha, Buddhist Law and Monk]
Wish for world peace,
Wish for His Holiness Dalai Lama to return home.
Protect the Tibetan State,
I self-immolate to contribute [to the wish]. Rechok's portrait. Image from Woeser.
10. Rechok (日玖), a 33-year-old herdsman with three children, self-immolated on May 30, 2012 near the Grand Lamasery of Dzamthang, Sichuan Province. The Tibetan Centre for Human Rights received his last words on August 18:

Wish for world peace and happiness. Please don't indulge yourself in killing and selling animal stocks, don't steal for the sake of His Holiness Dalai Lama to return to Tibet. Tibetans should speak to Tibetans and should not fight each other. I am willing to take up the pain and sufferings of all living beings. If I fall at the hand of the Communist Party of China, please don't resist. We have to be united and learn our culture. My family, don't be disheartened by my self-immolation.

11-12. Soinam (索南), a 24-year-old student. Choephak Kyab (曲帕嘉）, a 25-year-old student. The two self-immolated near the Grand Lamasery of Dzamthang, Sichuan Province, at different spots on April 19, 2012. Their last words was released onYouTube. Below is an excerpt:

Tibetans have distinctive religion and culture. The nation believes in love and compassion, with respect to others. However, Tibet has been invaded, repressed and cheated by China. We self-immolated for our misery and lack of basic human rights, as well as for world peace. The suffering of Tibetans deprived of basic human rights is much greater than our self-immolation.

13. Sobha Rinpoche (江白益西), a 27-year-old exiled Tibetan from Dawu County, Sichuan Province, self-immolated in Delhi a protest against the Chinese president's visit to India on March 26, 2012. Below is an excerpt of his last will:

My fellow Tibetans, for the future of our happiness, we need to have dignity and courage. Dignity is the spirit of a nationality, the courage for justice, the compass leading to future happiness. My fellow Tibetans, to seek the same happiness that is shared by all people in this world, we have to remember our dignity and make an effort in all matters. Dignity is the wisdom to distinguish right from wrong.
Freedom is the path to happiness for all living beings. Without freedom, we become a candle flame in the wind, the fate of six million Tibetans. If Tibetans from the three autonomous regions can be united, we will have won an accomplishment. Please don't lose your faith.

14. Tsering Kyi (才讓吉), a 19-year-old student, self-immolated in a market in Maqu County, Gansu Province. According to a reporter's account:

Back in January, Tsering Kyi discussed self-immolations with one of her family members. She said she understood why those people had chosen to do so: “No one deserves to live like this”.

Keep your courageous head up, for my dignity.
My parents to whom I owe their deepest love, my dear brother and family, I have to leave this world.
For my compassionate Tibetans, I will light my body.
My wish for Tibetan sons and daughters, you have to be united.
If you are Tibetan, you have to wear Tibetan clothing and speak Tibetan. Don't forget you are Tibetan.
If Tibetans are compassionate, love your parents and be united. Treasure the lives of all living beings and animals.

Like Buddha who gave his body to feed the tiger. Those Tibetans who sacrificed their lives shared my purpose - we give up our life for justice, truth, and freedom.

17. Tenzin Phuntsog (丁増朋措), a 41-year-old peasant and former monk, self-immolated in front of the district government in Qamdo County, Tibet, on December 1, 2011. He left behind four notes. Below is his last note:

Whenever I think of Tibet and the suffering of Karma Monastery, I can't continue my life waiting.

18. Phuntsog (彭措）, a 19-year-old monk at Gulden Temple, self-immolated in Ngawa County, Sichuan Province on March 16, 2011. According to an interview with other monks in the Temple, he told them:

19. Tapey (扎白), a 20-year-old monk in Gulden Temple, self-immolated on February 27, 2009 in Ngawa County, Sichuan Province. According to an article published on June 2, 2012 [en] in The New York Times, Tapey left a note behind saying he would kill himself if the government stopped an important prayer ceremony that very same day.