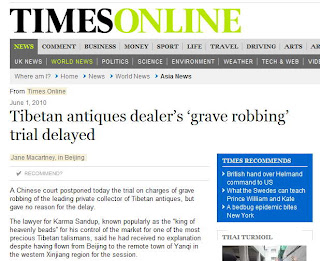 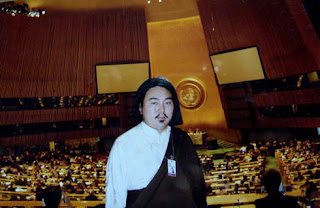 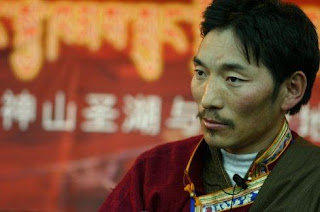 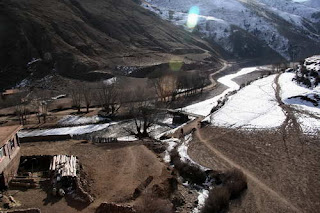 Karma Samdup's arrest may have been politically motivated, Chinese
sources told The Times

China's leading private collector of Tibetan antiques, an environmental activist, is scheduled to go on trial today on charges of grave robbing, an accusation already dismissed by police 12 years earlier.

Karma Samdup, a Tibetan from a village in remote Gongjue county, faces up to life imprisonment on the charges, which are believed to stem from political differences between the prominent Tibetan businessman and Chinese authorities in the restive region.

Karma Samdup, who is in his early 40s, was arrested in January while on a trip to the central city of Chengdu for discussions with the Hyatt hotel group about setting up a museum-style hotel in the Tibetan capital, Lhasa.

He was transferred to the mainly Muslim region of Xinjiang to face trial for grave-robbing. The charge was first brought against him in 1998 but soon dropped after it emerged that the Tibetan businessman had been unaware that some antiques he had bought had been sold to him by grave robbers. He was equipped with a government licence to purchase antiques and told police at the time that he could not be aware of their provenance.

However, anti-Chinese unrest that has roiled Tibetan areas of China in recent years, coupled with a feud between an environmental organisation set up by his family in his home village and the police, may have led to the revival of the charges, Chinese sources who have followed the case told The Times.

Karma Samdup is the third of three brothers to find himself behind bars in the last few months. The two others were arrested in August last year on accusations that their Voluntary Environmental Protection Association of Kham Anchung Senggenamzong was an illegal organization. Karma himself founded the separate, well-respected Three Rivers Environmental Protection Association, a non-governmental group that has won a string of domestic and international awards for its work to protect local Tibetan culture as well as wildlife on the Tibetan plateau.

However, the brothers ran into trouble after their small group clashed with the local police chief when they tried to stop him from hunting protected wild animals. A reference to the Dalai Lama as a Nobel Peace Prize winner on their website resulted in the case being handled as a more serious political crime. The police chief has since been promoted.

The youngest brother was sentenced to serve one year and nine months of "re-education through labour", which is an administrative punishment. The eldest is still awaiting trial on full criminal charges.

Karma Samdup had tried to keep the case out of the public eye and had been confident of winning the freedom of his brothers before he himself was arrested in January. One Chinese source who has known the collector for several years said: "He was completely surprised. He never expected that they would try to find a way to lock him up."

He believed that his prominence in the Tibetan community and in the world of collecting would protect him. He was the protagonist of the popular book "Heavenly Beads" by writer Liu Jianqiang which describes the importance of an elongated bead carved from black and white agate that is the most precious treasure of Tibetans.

Karma Samdup is China's biggest collector of the "dzi" beads -- known popularly as "heaven's pearl" -- and he commanded the market and set the price with a personal stock valued at more than 7 million yuan (700 thousand pounds).

Tibetans, and many Chinese, regard the beads as protective amulets, sometimes paying hundreds of thousands of pounds for those with as many as nine "eyes" -- or circular dots in the distinctive black and white design.

His lawyer, Pu Zhiqiang, said he was due to meet his client before the case came to trial today (Tuesday). He told The Times: "I have not seen sufficient evidence to support a criminal charge. This seems very inexplicable to me, especially since this dates back more than a decade. I have many questions."

A Chinese court postponed today the trial on charges of grave robbing of the leading private collector of Tibetan antiques, but gave no reason for the delay.

The lawyer for Karma Sandup, known popularly as the “king of heavenly beads” for his control of the market for one of the most precious Tibetan talismans, said he had received no explanation despite having flown from Beijing to the remote town of Yanqi in the western Xinjiang region for the session.

Pu Zhiqiang met his client yesterday and said that the once-burly Tibetan, a renowned environmental activist, had become a shadow of his former self after five months in detention, and had lost about 40 pounds (18 kgs). He declined to say whether Mr Karma’s weight loss was as a result of poor treatment and bad food, but said he was in poor spirits.

Mr Pu said: “What do you expect after so long in detention. He is in rather low spirits. But he is reading Buddhist scriptures to help his morale.”

No new date was given for Mr Karma’s trial on charges that were dismissed by police 12 years ago after an investigation showed he was not responsible for the provenance of antiques he bought with a government certificate permitting him to operate as a collector.

The revival of the charges is believed to stem from political differences between the prominent Tibetan businessman and Chinese authorities in his hometown in remote Gongjue county in eastern Tibet. He had been fighting for the release of his two brothers, detained after their village-level environmental NGO clashed with the local police who were hunting protected wildlife.

His wife, Zhenga, told The Times: “I haven’t seen him since he was arrested. The detention house won’t allow the relatives to visit him. I tried to send him some clothes and money, but they told me he doesn’t need these. When lawyer Pu told me his conditions, I was very upset.”

She said the couple’s two daughters believed their father was travelling on business but were disappointed not to see him today for Children’s Day. She added: “I have no idea why he was arrested, why a case closed 12 years ago is raised again. He has been doing good things: culture, charity, environmental protection. I don’t think he has offended anyone.”

However, anti-Chinese unrest that has roiled Tibetan areas of China in recent years, coupled with the feud between his brothers and the police may have led to the renewed charges, Chinese sources told The Times.

Karma Sandup is the third of three brothers to find himself behind bars in the last few months. The two others were arrested in August last year on accusations that their Voluntary Environmental Protection Association of Kham Anchung Senggenamzong was an illegal organisation. One is serving one year and nine months of “re-education through labour” while the other faces criminal charges.

Mr Karma himself founded the separate, well-respected Three Rivers Environmental Protection Association, a non-governmental group that has won a string of domestic and international awards for its work to protect local Tibetan culture and whose honorary chair is the daughter of the late Panchen Lama – Tibet’s second holiest monk.

Mr Pu said he expected to meet his client again and would ask for bail. “I have good ground to ask for bail. He has been detained for a very long time. and he is not a danger to society. So why not let him go home and wait there?”