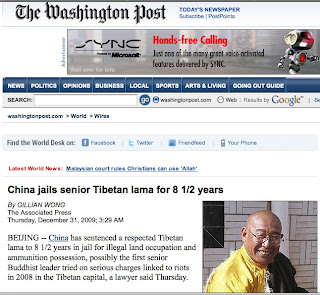 FILE - In this file photo taken on Nov. 23, 2005 and released on April 22, 2009 by the International Campaign for Tibet, Phurbu Tsering Rinpoche is seen in Ganzi, southwestern China's Sichuan province. China has sentenced the respected Tibetan lama to eight-and-a-half years in jail for illegal land occupation and ammunition possession, possibly the first Buddhist leader tried for serious charges linked to riots in 2008 in the Tibetan capital, a lawyer said Thursday, Dec. 31, 2009 (AP Photo/International Campaign for Tibet, File) (AP)
By GILLIAN WONG
The Associated Press
Thursday, December 31, 2009; 3:29 AM

BEIJING -- China has sentenced a respected Tibetan lama to 8 1/2 years in jail for illegal land occupation and ammunition possession, possibly the first senior Buddhist leader tried on serious charges linked to riots in 2008 in the Tibetan capital, a lawyer said Thursday.

Phurbu Tsering Rinpoche is a Buddhist priest, or lama, and is highly respected. He was arrested May 18, 2008, just days after more than 80 nuns in Ganzi held a demonstration against an official campaign to impose "patriotic re-education" on their convents, in which they were required to denounce Tibet's spiritual leader, the Dalai Lama.

The International Campaign for Tibet, an activist group, has described Phurbu Tsering Rinpoche as a "deeply respected local figure known for his work in the community" - including the building of a center for the aged and two clinics in Ganzi prefecture - whose detention aroused deep resentment among local Tibetans.

The sentence was handed down Dec. 23, eight months after the monk first went on trial in April, after authorities said they found a pistol, more than 100 bullets under a bed in his living room.

His lawyers said he was forced into making a confession following a four-day police interrogation and threats to detain his family. The 53-year-old monk had faced up to 15 years in jail.

Jiang, one of two attorneys who advised the monk from early in the case, said he had pleaded not guilty to the charges. The court did not allow Jiang and Li Fangping, another well-known activist lawyer, to represent the monk in later trial sessions, Jiang said.

"We don't believe there was sufficient evidence to convict him on either of the charges," Jiang said. Phurbu Tsering Rinpoche was sentenced to more than seven years in jail on the charge of illegal expropriation of land, which was related to the center for the aged he set up. The monk says the land was given to him lawfully.

The court sentenced him to about another 1 1/2 years for possession of ammunition.

Jiang added that the lawyers and the monk's family believed he should appeal for a lighter sentence. "But we don't know if he will appeal. I think he has lost confidence in China's courts since this case."

A rugged, deeply Buddhist region filled with monasteries and nunneries, Ganzi is known for its strong Tibetan identity and has been at the center of dissent for years. It saw some of the most violent protests in spring 2008.

Rioting that broke out in Lhasa on March 14, 2008, led to the most sustained Tibetan uprising against Chinese rule in decades. The violence in the capital killed 22 people, according to Chinese officials. State media say more than 950 people were detained after the rioting and dozens of people sentenced for their part in the protests.

Beijing says the demonstrations were part of a violent campaign organized by the Dalai Lama and his supporters to throw off Chinese rule in Tibet and sabotage the Beijing Olympics in August 2008.

The Dalai Lama, who fled Tibet 50 years ago amid an uprising against Chinese rule, has denied the charge and says he seeks only significant autonomy for Tibet under continued Chinese rule. 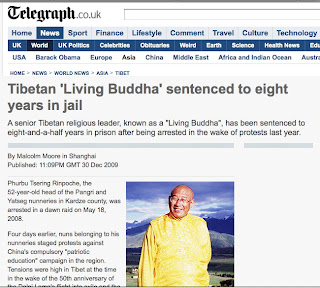 A senior Tibetan religious leader, known as a "Living Buddha", has been sentenced to eight-and-a-half years in prison after being arrested in the wake of protests last year.
By Malcolm Moore in Shanghai
Published: 11:09PM GMT 30 Dec 2009

Mr Phurbu was initially charged with the illegal possession of firearms.

Phurbu Tsering Rinpoche, the 52-year-old head of the Pangri and Yatseg nunneries in Kardze county, was arrested in a dawn raid on May 18, 2008.

Four days earlier, nuns belonging to his nunneries staged protests against China's compulsory "patriotic education" campaign in the region. Tensions were high in Tibet at the time in the wake of the 50th anniversary of the Dalai Lama's flight into exile and the beginning of Chinese rule.

The monk's legal team said the firearms had been planted and a confession extracted through torture. They added that while his property had been ceded to him, the paperwork had not been drawn up correctly.

An initial trial last year provoked a wave of media attention and a verdict was never returned. "The story of this religious leader is symptomatic of Beijing's heavy-handed treatment of Tibetans," said Woeser, a leading Tibetan activist. The local government in Kardze county viewed his case as one of the biggest causes of "instability" in the region.

At a second trial in Kangting, the monk's lawyers were disqualified from representing him and his family was forbidden to hire a fresh legal team and forced to use a court-appointed defence. Although he was acquitted of the illegal possession of a firearm, he was given seven years for illegally occupying state land and a further one-and-a-half years for possessing the bullets.
发帖者 Tsering Woeser 时间： 23:20