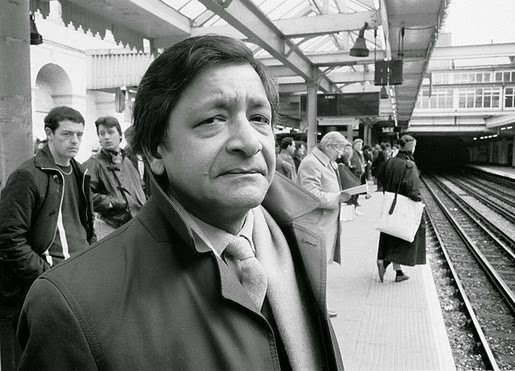 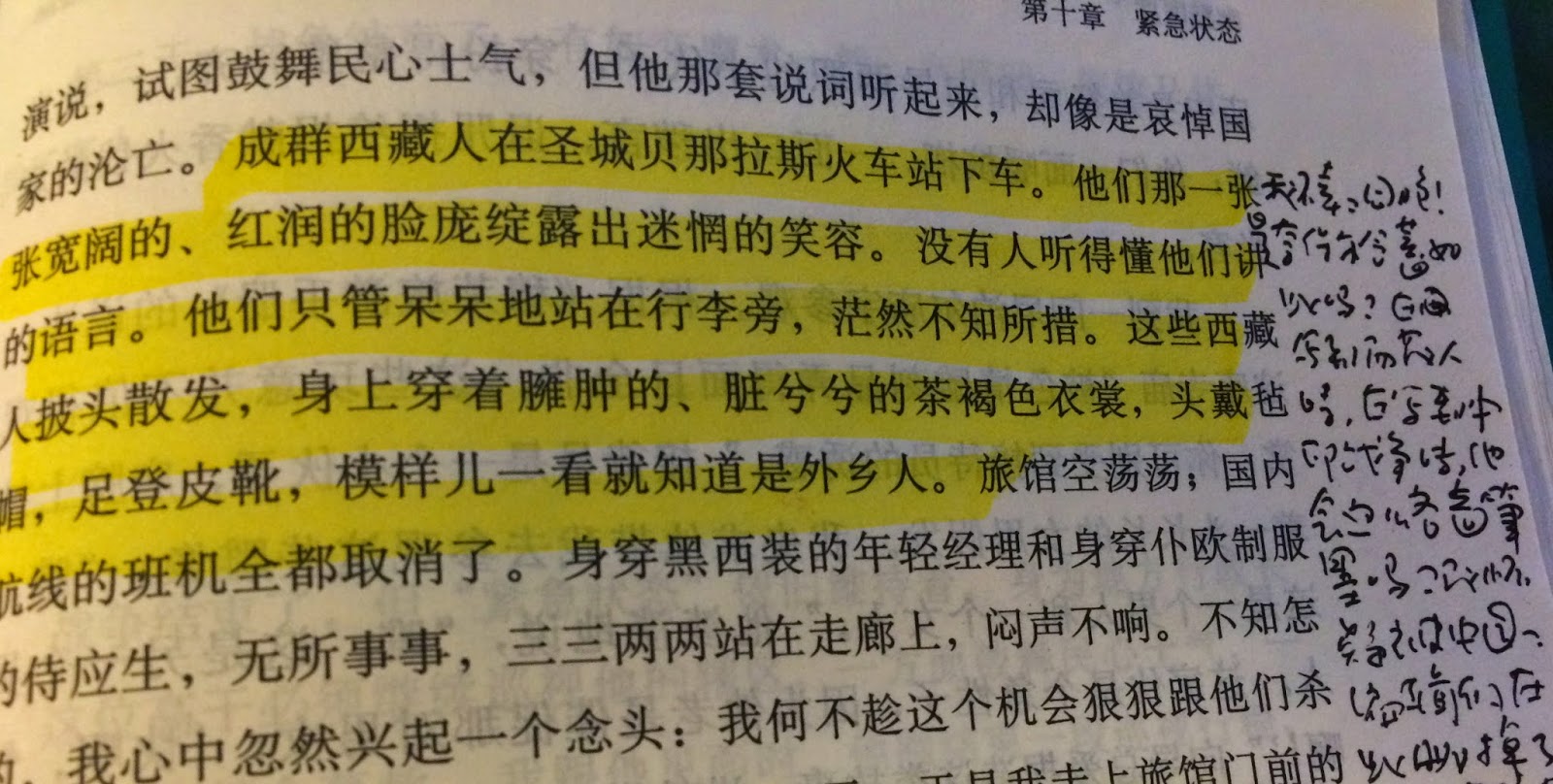 第一部分原文：in a dusty square on Residency Road, was the caravanserai for Tibetans with their long-legged boots, hats, plaited hair, their clothes as grimy-grey as their weather-beaten faces, men indistinguishable from women.

第二部分原文：Assam lay open; Mr Nehru offered the people of the state comfort which was already like helpless condolence. Tibetan refugees got off the train at Banaras. There was smiling bewilderment on their broad, ruddy faces; no one spoke their language and they stood uncertainly beside their boxes, outlandish in their bulky wrappings, grimed to khaki, their long hair, their boots and hats.

Car doors banged outside the Guest House. Someone, or some party, had arrived. Very quickly after the banging of the doors a briskly moving group of men in coloured robes came up the steps and walked through the inner room: big men in big shoes, taking firm strides. I saw this only at an angle; I was sitting slightly turned away from the inner room. And then Prakash, lowering his voice, told me it was the Dalai Lama who had arrived. It was a little unlikely, but I was half prepared. I knew that the Dalai Lama was on tour in India. In Bombay I had read in the newspaper one day that the Dalai Lama was coming to the city to visit Buddhists there. I wasn’t sure what was meant by that. When people in Bombay spoke of Buddhists they didn’t mean Tibetans; they were more likely to mean Dalit neo-Buddhists. But I hadn’t asked further about the Dalai Lama’s visit to Bombay. And now, without any announcement I had heard of, with only a few cars, and few state policemen, he had come even further south, and was really far from home. The Dalai Lama moved so fast that, almost as soon as Prakash had told me who it was, the figure had gone through the inner room, half hidden by an assistant walking close to him, swinging a briefcase. The end of a stride, the swing of the assistant’s briefcase – that was all I had really caught. Afterwards, monks came out to the wide verandah where we were sitting. After the rush of their arrival, they were calmer. From the bareness of the verandah they looked down at the scorched lawn and gardens. Their heads were shaved, and they wore sweaters below their dark-red robes. It seemed at first that they were only staring at the strange aspect of the Indian South. But they were looking for their followers. Prakash told me there was a Tibetan ‘camp’ near Mysore City, about 100 miles to the south. There, on land that had been given them by the Indian government, the Tibetans grew maize, did dairy farming, and knitted their distinctive sweaters. There had been no Tibetans in the grounds of the State Guest House when we had arrived. But gradually, in small informal groups, the Tibetans from the Mysore City camp – who had been waiting in the streets outside – began to appear on the burnt lawn, the women in traditional Tibetan dress, the men in jeans, bright-faced, handsome people, who perhaps now, after more than a generation away, were beginning to lose touch with home: another Asian dispossession, part of the historical flux. My thoughts for some time were with those people. The monks remained on the verandah, looking out, as though they wanted to fix their gaze for a while on each person in the small, scattered, waiting groups. And even when Prakash began to speak again, I felt we were continuing to be part of that wordless Tibetan scene.