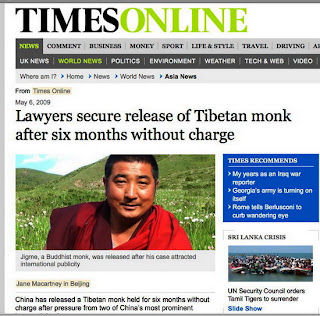 From Times Online
May 6, 2009
Lawyers secure release of Tibetan monk after six months without charge
Jane Macartney in Beijing

Jigme, a Buddhist monk, was released after his case attracted international publicity

China has released a Tibetan monk held for six months without charge after pressure from two of China’s most prominent human rights lawyers.

Jigme, a 42-year-old lama, was released on May 2 and returned a day later to his monastery, half a year after dozens of police raided his quarters and took him away for the second time in a year.

Li Fangping, one of two lawyers who took up the monk’s case last month, told The Times: “He was released partly because there was insufficient evidence. Even though he spoke about how he was tortured after the March 14 incident, this was insufficient to make a criminal case. He is now released on bail.”

Police have arrested hundreds of Tibetans, among them monks and civilians, since a riot in the capital Lhasa on March 14 last year left 22 people dead and led to anti-Chinese demonstrations across the Tibetan plateau. Many have yet to be charged.

Mr Li said that an important factor in the decision to free the monk was the appearance of lawyers to argue on his behalf.

“When the police told him that lawyers had come forward to help him, he said he wanted legal representation. Before we even had time to see him, he had been released.”

The monk told Mr Li and another lawyer, Jiang Tianyong, that he had received a warning from the police not to accept interviews and to see as few people as possible. Mr Li said that the monk told him that he was as well as could be expected.

Jigme, a member of the Gyuto Dratsang or Upper Tantric College, one of six institutes of learning at Labrang Monastery, incurred the wrath of the authorities when he posted a video account on YouTube of his ordeals after the March unrest.

He described how he was detained on March 12 and questioned for two days before being taken to a prison in a nearby town.

Conditions there were harsh, he said. "They would hang me up for several hours with my hands tied to a rope ... hanging from the ceiling and my feet above the ground. Then they would beat me on my face, chest and back, with the full force of their fists."

His interrogators wanted to know if he was a leader of protests outside Labrang on March 15 and what contact he had with the Dalai Lama, the region’s exiled spiritual leader.

“Finally, on one occasion, I lost consciousness and was taken to hospital. After I regained consciousness at the hospital, I was once again taken back to prison where they continued the practice of hanging me from the ceiling and beating me."

After Jigme was taken to hospital for a second time, apparently on the verge of death from internal injuries, he was handed over to his family who took him to another hospital where he recovered after 20 days.

After making the video, he spent several weeks on the run, hiding in the mountains until the weather turned too cold and he returned to his monastery. He was taken away within days of his return.

It is the second time in recent weeks that Mr Li and Mr Jiang have come forward to help a detained Tibetan.

A court decided at the last minute to postpone judgment last month on a Tibetan living Buddha who faces 15 years in jail on charges of possessing illegal weapons and illegally seizing government land.

Legal experts said that such a move was unusual for a Chinese court and could indicate that the unusually spirited defence mounted in court and the international publicity the case attracted could have prompted debate among judicial officials over the sentence.
发帖者 Tsering Woeser 时间： 19:58