Chalk Tibet & WHAT MUST I DO? （Jamyang Norbu） 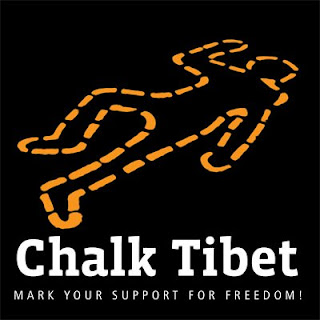 This is not suicide,
this is sacrifice in order to draw the world's attention. 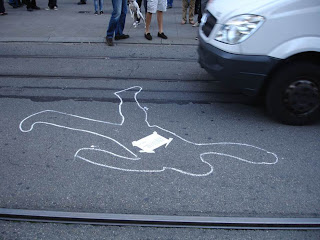 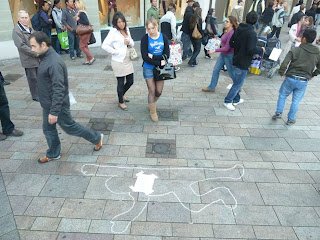 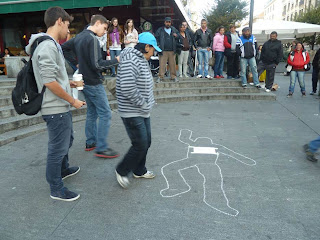 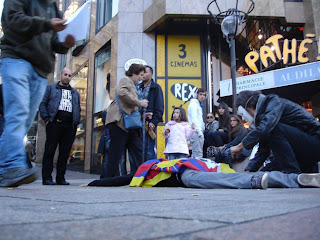 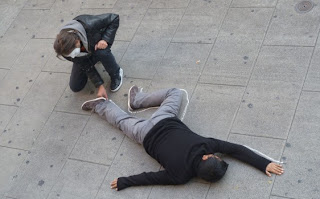 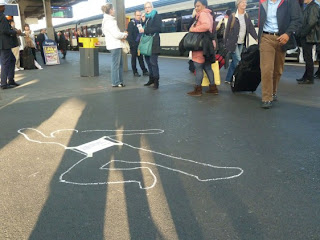 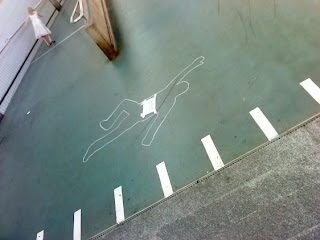 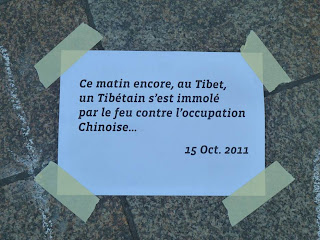 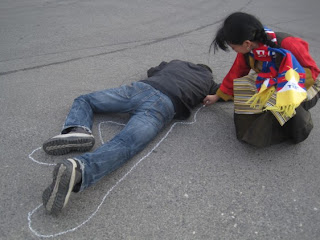 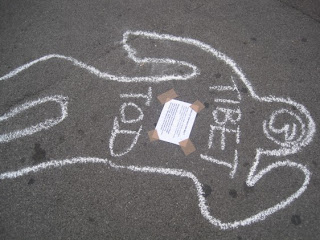 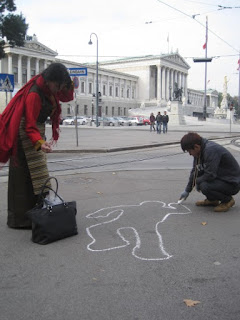 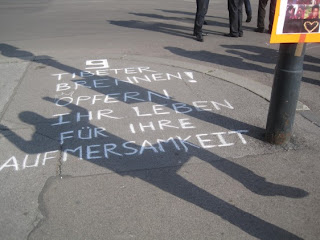 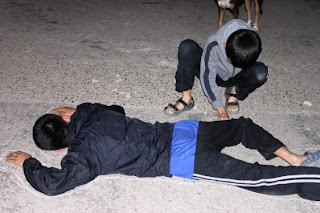 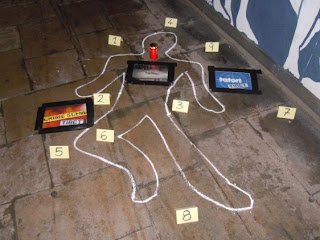 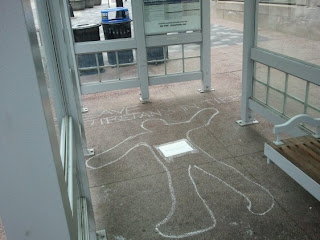 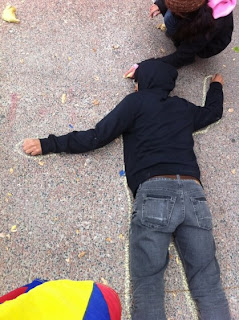 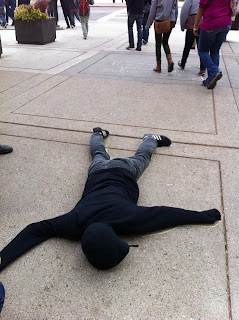 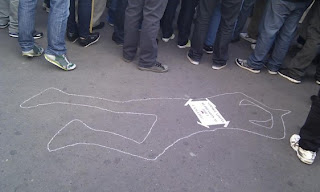 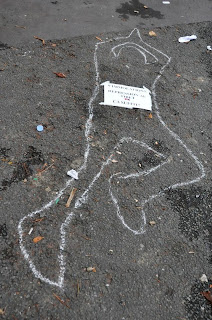 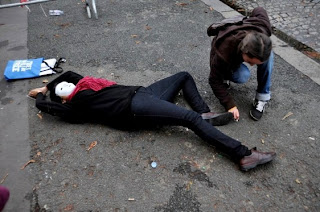 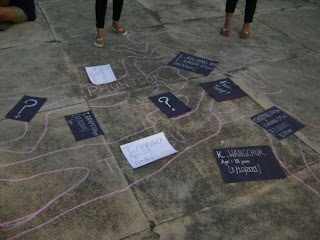 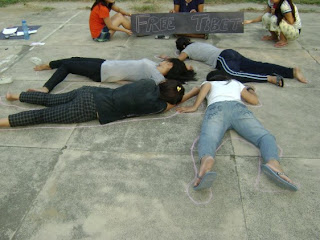 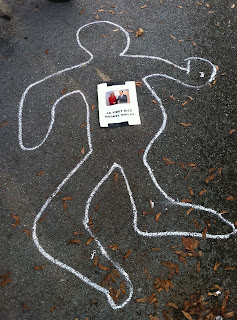 WHAT MUST I DO?

In 1946 when the Muslim League declared “Direct Action Day” and some of the most horrendous and large scale Hindu-Muslim violence erupted throughout India, one of the worst hit areas was the Noakhali district of Bengal. Mahatma Gandhi walked barefoot through village after village in this district, in an angry and hostile atmosphere, trying to persuade people to take a pledge not to kill others. Some strewed thorns and filth in his path and one man even physically attacked him. Gandhi was then 77, but undaunted kept on with his march for peace. Even in this darkest and seemingly most hopeless moment of his life, he was single-mindedly action-oriented. He was heard constantly murmuring to himself.

Tibetans all over the world are asking that question in the wake of the “fire protests” of the eight young monks and, today, of the nun, Tenzing Wangmo (age 20) in Ngaba. Demonstrations, stand-ins, vigils, marches, hunger-strikes, petitions and signature drives have been organized in Minnesota, New York, Dharamshala, Taiwan, London, New Delhi, Geneva, Paris, and other cities.

In Tibet itself the acts of self-immolation have not taken place in isolation and protests have been reported in the surrounding region and the calls for wider protests are growing. Four days ago two Tibetans were shot by Chinese troops during a protest outside a police station in another part of Sichuan province. Woser la has been blogging incessantly and so have other Tibetan writers and bloggers in Tibet and China, Check out High Peaks Pure Earth for an English translation of a poem “Mourning” by the blogger Sengdor which appeared on October 11th.

But little notice has been paid by the world to the “fire-protests” in Tibet, there has only been some passing references on CNN, and a couple of brief reports in the BBC. Of course the world media has never been noticeably outspoken or brave when it comes to reporting on Tibet and China, but that is a given. I think that something else is using up all the available media oxygen at the moment. The “Occupy Wall Street” protests have spread to over sixty cities worldwide and show every sign of getting bigger and noisier by the week. I am completely supportive of this protest, and since the issue is one that affects everyone (whether you support the protestors or not) it is going to dominate the headlines for weeks to come. That’s why in my previous posting I suggested that our biggest demonstration of support to the people in Tibet should be five months from now on 10th March 2012. But I absolutely support the demands of feistier spirits that we have to do something right now

So what can we do?

A Tibet activist in Switzerland has come up with a brilliant idea. The beauty of the scheme is it’s unbelievable simplicity:

• It needs no more than two people to execute.
• It takes little time, about ten to twenty minutes at the most.
• It is completely legal and not unsafe in any way.
• It requires no resources other than a piece of chalk and a digital (cellphone) camera.
• Each action, like an individual brick in a building, has a definite and structurally important place in the overall success of the project.

And that’s it. I am not kidding.

Go to http://www.chalktibet.org/ If you go to the site and click on the “How does it work…? Tab” you’ll get the instructions. This action can be done on the fringes of an organized demonstration, at periodic moments during a march, or at any opportune time and place (preferably a place with a lot of foot traffic, where people will gather and look on). This action began in Switzerland and is now being taken global. Join in! And pass on the web address to all your friends, support groups or other interested parties!

Here are the instructions (from the site):

How does it work…?
The recent self-immolation protests that took place in occupied Tibet call us to action! We can’t remain silent, yet what can we do to effectively generate broad awareness of the tragic situation in Tibet that is driving Tibetans to such desperate measures? Well, here is one simple, yet thought-provoking action that can be undertaken very easily, at no cost and with little time:
Using a simple piece of chalk, let’s outline the Tibetan dead in our streets.
The objective of this action is to generate the buzz which will cause it to go viral, along the lines of guerrilla marketing. This means that your particular action in this campaign needs to be shared among your friends and, via a dedicated website, among larger online communities.
How to proceed
This powerful action requires very little: two persons, one piece of chalk and a camera. Here’s how to do it:
1. Choose a busy spot or a place with symbolic significance in your own town or city.
2. One person lies flat on the ground, as if he or she were a dead body (this should draw much attention by itself).
3. The other person draws a chalk outline of the body.
4. Tape a piece of paper with a message inside the chalk outline or write the message directly on the ground with chalk. A typical message might read “Once again this morning [or yesterday, or last week] a Tibetan committed self-immolation in Tibet in protest against China’s brutal occupation”.
5. Take a photo of the scene.
Post the photo here and on your favorite social networks, requesting your friends to do the same in their own towns and cities.

A few suggestions of mine (JN) for color, identification and variety. Just one idea per photo. Keep it simple. Think up some new ones.

Try for a little background in the shot: bystanders and something to suggest the place. But don’t sweat it. The outline comes first.

I believe these and other actions and projects will draw the attention of people the world over to the sacrifice of the young nun and monks and their demands for freedom and the return of the Dalai Lama to Tibet. I believe that all the many marches, protests and future demonstrations will contribute to igniting a rangzen revolution throughout Tibet. I believe that in the not too distant future the Chinese Empire will “wither away” as all evil empires have invariably done so, and I believe I will have an opportunity to make a small contribution to the creation of an independent democratic Tibet.

Gandhi told me so. “Men often become what they believe themselves to be. If I believe I cannot do something, it makes me incapable of doing it. But when I believe I can, then I acquire the ability to do it even if I didn’t have it in the beginning.” Mohandas Karamchand Gandhi.

The views expressed in this piece are that of the author and the publication of the piece on this website does not necessarily reflect their endorsement by the website.
发帖者 Tsering Woeser 时间： 00:57