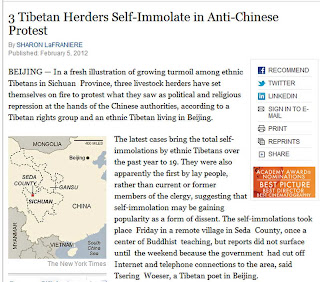 BEIJING — In a fresh illustration of growing turmoil among ethnic Tibetans in Sichuan Province, three livestock herders have set themselves on fire to protest what they saw as political and religious repression at the hands of the Chinese authorities, according to a Tibetan rights group and an ethnic Tibetan living in Beijing.

The latest cases bring the total self-immolations by ethnic Tibetans over the past year to 19. They were also apparently the first by lay people, rather than current or former members of the clergy, suggesting that self-immolation may be gaining popularity as a form of dissent. The self-immolations took place Friday in a remote village in Seda County, once a center of Buddhist teaching, but reports did not surface until the weekend because the government had cut off Internet and telephone connections to the area, said Tsering Woeser, a Tibetan poet in Beijing.

She said that one of the three men had died and that the two others, believed to be about 30 and 60 years old, were severely injured.

The Chinese government has sealed off a number of counties in the region and intensified security in an attempt to curtail the largest outbreak of unrest among ethnic Tibetans since the 2008 riots in Tibet’s capital, Lhasa, and elsewhere.

Protests in late January turned deadly in Seda, which is on the border of Gansu Province, and in Luhuo County, known in Tibetan as Draggo, about 80 miles, to the south.

Human rights groups that track the repression of Tibetans have given varying accounts of the number of protesters who died in clashes with the police last month. Some say that two people were killed when the police fired into crowds; other estimates ranged as high as 11, with dozens wounded.

Two dozen police officers and firefighters were wounded while trying to subdue the disturbances, the state-run media reported.

The latest reports suggest that self-immolation as a form of protest is spreading beyond the Tibetan clergy, Robert Barnett, director of the Modern Tibetan Studies Program at Columbia University in New York, said by telephone. Until Friday, the 16 self-immolations from the past year had involved monks, nuns or former clergy members, he said.

Judging by the names given for the two injured men, Tsaptai Tsering, and Kyarel, Mr. Barnett said, the latest protesters appeared to be lay people. Ms. Woeser, the poet, said that the three had herded sheep and cows and were not members of the clergy. Unlike the others, they lived far from the larger towns and monasteries where past protests had occurred, according to media reports.

In Sichuan Province in particular, he said, the authorities have blocked off monasteries and adopted other aggressive measures that have raised tensions.