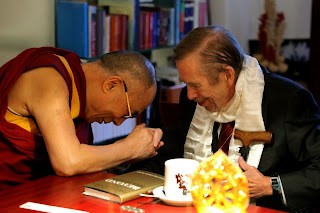 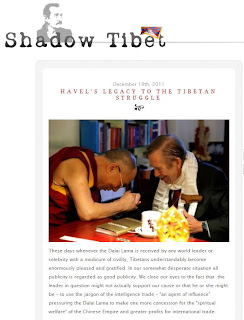 HAVEL’S LEGACY TO THE TIBETAN STRUGGLE
by Jamyang Norbu
These days whenever the Dalai Lama is received by any world leader or celebrity with a modicum of civility, Tibetans understandably become enormously pleased and gratified. In our somewhat desperate situation all publicity is regarded as good publicity. We close our eyes to the fact that the leader in question might not actually support our cause or that he or she might be – to use the jargon of the intelligence trade – “an agent of influence” pressuring the Dalai Lama to make one more concession for the “spiritual welfare” of the Chinese Empire and greater profits for international trade.
One world leader who has always received the Dalai Lama with true friendship and who was also resolutely opposed to the Communist Chinese occupation of Tibet, died two days ago. Haclav Havel’s opposition to Beijing’s tyranny was not confined to the issue of Tibet. When Liu Xiaobo was arrested, Havel (though gravely ill) and other Czech dissidents, attempted to deliver a letter to the Chinese Embassy in January 2010 (before Liu won the Nobel Peace Prize) but found the doors closed and no one to receive it. The BBC reported that “It was an absurd scene that could have come out of one of the plays he wrote in the 1960s, poking fun at the Soviet-backed authorities who ruled his country at the time.”
For Havel was first and foremost a writer and thinker, and not a career politician. In fact under the Communists he spent four and a half years in prison for opposing Czechoslovakia’s Communist government before emerging as a leader of the Velvet Revolution that swept it aside in 1989.
This post is not intended as an eulogy or a discussion of Havel’s literary work, but rather to introduce an important, even game-changing, legacy that he left us Tibetans and other freedom fighters struggling against the oppression and violence of “post-totalitarianism”. This is a term Havel used in his long essay The Power of the Powerless which is in fact a strategic discussion on how to effectively challenge repressive regimes and systems in the post-Stalinist (and Maoist) world.
I cobbled together a simple précis of Havel’s thesis in my post “Seeking the Power of the Powerless” which I wrote after Aung San Suu Kyi was released last year. I would request readers to read (or re-read) the post, and if possible follow it up with a study of Havel’s actual essay. I think it might provide a broader theoretical perspective to our understanding of what is happening inside Tibet, and perhaps help shape the strategy we must adopt to bring about the Rangzen revolution.
发帖者 Tsering Woeser 时间： 20:03