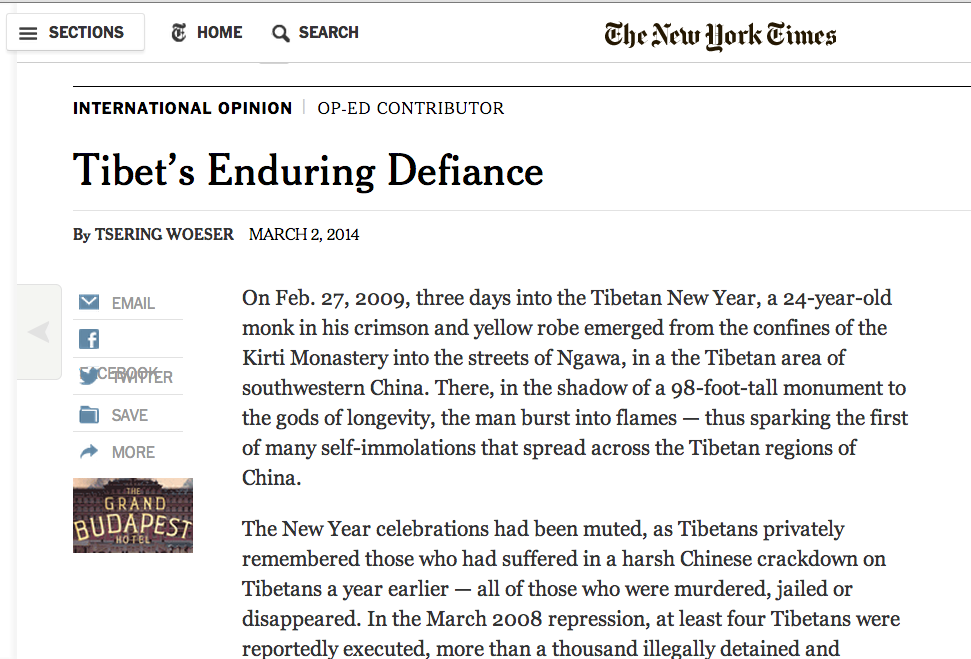 On Feb. 27, 2009, three days into the Tibetan New Year, a 24-year-old monk in his crimson and yellow robe emerged from the confines of the Kirti Monastery into the streets of Ngawa, in a the Tibetan area of southwestern China. There, in the shadow of a 98-foot-tall monument to the gods of longevity, the man burst into flames — thus sparking the first of many self-immolations that spread across the Tibetan regions of China.

The New Year celebrations had been muted, as Tibetans privately remembered those who had suffered in a harsh Chinese crackdown on Tibetans a year earlier — all of those who were murdered, jailed or disappeared. In the March 2008 repression, at least four Tibetans were reportedly executed, more than a thousand illegally detained and countless others went unaccounted for.

Tapey, who like many Tibetans goes by one name, had left a note warning that he would set himself on fire if the prayer ceremony commemorating the victims of the 2008 crackdown was canceled. When the order came down forbidding memorials, Tapey followed through on his threat.

Beginning with the case of Tapey, I set about documenting on my blog the circumstances of each self-immolation. Never could I have anticipated that so many Tibetans would follow his lead and give rise to a new mode of protest. Over the years, I had trouble keeping up with how fast the flames were devouring life after life. All told, 131 Tibetans have attempted suicide by self-immolation. Tapey survived, as have some others. But ascertaining exactly how many lived through the flames is impossible to know; the police take them away, and they remain incommunicado.

Never before have so many Tibetans sacrificed themselves to protest Chinese rule. The self-immolations, which continue to this day, show that even after more than 60 years of Chinese control of our land and livelihoods, Beijing is far from winning the hearts and minds of Tibetans and the resistance has not diminished in the least. All the while, Beijing pursues its policy of violent suppression, never heeding Tibetans’ demands for equality for all and the return of our spiritual leader, the Dalai Lama, who has lived in exile for more than half a century.

Those who do not understand the plight of the Tibetans see self-immolation simply as suicide. Yet there are so many other ways to die. Why would anyone choose to commit suicide by having every inch of his body charred? This question holds the key to the driving force behind these desperate acts: Self-immolators seek to protest in the most extraordinary manner by suffering what ordinary people could not possibly bear.

There was a time when wave after wave of Tibetans took to the streets, screamed slogans and distributed leaflets, only to be beaten up and thrown into jail. These mass rallies garnered as much notice as pebbles tossed into a stream. Since Beijing’s 2008 crackdown, the Tibet Autonomous Region has turned into what looks like an occupied zone, with checkpoint after checkpoint and military installations everywhere. Large protests can no longer even get off the ground.

If Tibetans saw even a sliver of an opportunity to hold demonstrations, then they would not resort to self-immolation. This state of desperation was captured by the writer Gudrub, who declared before perishing in an act of self-immolation in the autonomous region in October 2012, “Our peaceful struggle must be radicalized.”

In the police state that is Tibet, it’s impossible to gauge public reaction to the self-immolations. Most Tibetans keep their heads down and do their best to comply with Beijing’s diktats — from flying the Chinese national flag to concealing likenesses of the Dalai Lama. But from my experience, it seems the vast majority of Tibetans harbor quiet sympathy for the self-immolators and see them as martyrs. More and more portraits of self-immolators grace shrines in Tibetan homes.

The number of self-immolations peaked at 28 in November 2012, when a new slate of national leaders was installed during the 18th Communist Party Congress in Beijing. It was evident that the self-immolators were hoping that they could spur the new leaders toward a policy shift on Tibet.

But these hopes soon faded. Once the party’s chosen ones assumed their positions, they declared war on self-immolation, with harsh measures against “accessories,” meaning family members and relatives, villagers and even the monastery associated with any self-immolator. Since then, several hundred Tibetans have been arrested and imprisoned; many more have been given stiff fines and even barred from making pilgrimages to holy sites.

Of late, there have been far fewer self-immolations. But it would be wrong to see this as a sign that Beijing has gained the upper hand.

As the early 20th-century writer Lu Xun wrote, “The crack of thunder can be heard where there is silence.” Tibetans might be quiet for now, but the thunder of their voices will someday shake Tibet — and the world.


Tsering Woeser, a Tibetan poet, journalist and blogger, is co-author of ‘‘Voices from Tibet: Selected Essays and Reportage.’’ This article was translated by Violet S. Law from the Chinese.