“Karma: The key to Tibet” By Woeser 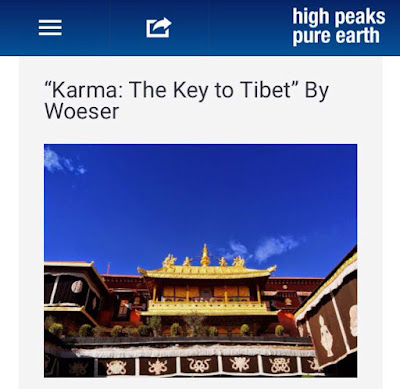 High Peaks Pure Earth has translated a blogpost by Woeser written in October 2014 for the Mandarin service of Radio Free Asia and published on her blog on October 15, 2014.


Woeser takes the Tibetan word for karma as the starting point for her article and then continues to think about the many meanings and feelings the word evokes. In Tibetan, the word is ལས་, in Wylie it would be transliterated as las, in English it would be commonly translated as Karma and pronounced Ley, with the s silent).

“Karma: The key to Tibet”
By Woeser


There is a frequently used word in Tibetan language, using Mandarin pinyin to spell it, this would be “Le”. “Ley” refers to principal and secondary causes in a course of events. This word, so I feel, embodies the key to understanding Tibet, it represents the quintessence of daily Tibetan life.

Or in other words, “Ley” is the gene that 6 million Tibetans share. I asked a friend to look it up in the dictionary and learned that originally, this word derived from and had several secular meanings like occupation or profession as well as mystical meanings such as former actions and fate. Of course, saying that “ley” is a main moral pillar of Tibet would not be entirely correct, because for every Buddhist individual or group, the belief in karma is the first and most important thing. But “ley” has deeply embedded roots in Tibet, its history and meanings are complex; but this is why when one says out the word “ley” in Tibetan, it is like embarking on a journey into the past. On the way, one slowly passes by each and every one of these complex roots. It is the rediscovery of our memory! Many overlooked details, many scattered scenes have led to the creation of today’s Lhasa: whether the hesitation of some aristocrat; whether the unforeseen incident at sunset; the romantic love of a PLA soldier… it is like a series of yellowed photographs that – one by one – reveal the course of events and the reasons behind them.

Each and every detail happens for a reason. Every detail has a cause and effect. Lhasa and Tibet are the way they are because of the sky, the earth, the people and their intimate relations. Of course, embarking on a journey into the past would be an endless undertaking. So we can only zoom in on the more recent line of events, the time periods from 1900 up to 1950, the first half of the 20th century would be enough to reveal countless major causes that led to countless major effects and how they are manifesting themselves – one by one – in today’s Tibet. I am just one of those effects, doing everything I can to search for others. “Ley” belongs to the individual, it also belongs to the people, to all living things; behind this word lies the rich tradition of Tibet and the Buddhist world.

Actually, saying the word “ley” evokes sad feelings, it does not connote happiness. “Ley” has no glory attached to it, only the shadow of failure. So when Tibetans say “ley”, it is like shedding tears. No one understands “ley” better than Tibetans do, not even other Buddhists around the world.

This has to do with the mental state of our entire ethnic group; it has been transmitted from generation to generation, it is innate and in our blood from birth. But here, I would rather look at “ley” in the context of the collective memory of our ethnic group. It is a heavy collective memory that does not go far back; no more than 100 years, or perhaps just 50 or 60 years.

When Tibetans utter the word “ley”, they express different shades of feelings from their hearts, from their mouths that have all been informed by this collective memory. “Ley” can express relief, sometimes it can serve as an excuse, and sometimes it can be used as a numbing drug. When used to express relief, it is usually in the context of showing religious emotions. When used as an excuse, “ley” is covering up feelings of misery and failure. When used as a numbing drug, “ley” signals that someone has been corrupted, has shamelessly taken sides with the enemy. This is quite thought-provoking. For different people, “ley” can express different emotions of either happiness or pain. If people could not rely on the word “ley” to show their emotions, people would not be able to make sense of and comprehend their lives; and if people don’t understand their lives and each other, they will easily be unhappy and broken.

I do not mean to criticise the meanings of “ley”; personally, I cherish this word. It lightens up my heart, a heart tainted by my previous upbringing and education. But I do see the danger in “ley” obstructing many of our fellow Tibetans; it makes them indifferent towards the current status quo, leads them to submit themselves to current humiliation, and it makes them become complacent; “ley” leads to a form of fatalism.

Of course, we cannot blame “ley” for this. Tsongkhapa, for example, indicated how all Buddhists had to follow three stages of practice towards enlightenment, the upper, middle, and lower stages; those reaching the upper stage were only a few, at the middle stage were a number of people, but the majority were at the lower stage. “Ley” is like a ray of light shining onto the vast snow mountain; it can warm the wise man’s heart, lift up his spirits. But for the corrupt, evil and foolish people, it is hardly more than a straw to clutch at; these include those who had to endure poverty, failure, and shame, over and over again, and who have been infected by an incurable disease.

For me, “ley” represents the experiences of one’s own heart. As long as externalities do not conflict with one’s inner experiences, we can ignore them, all that matters is what touches us inside. It is like meeting a vegetarian among a bunch of meat-eaters, like going far away and meeting a person with the same beliefs, the same precious feeling. It is not important how many foreign countries I am trapped in, as long as I cherish my own ancestral land in my heart. When I look into myself, I can see my ancestral land, and this gives me the courage and spirit to keep living in a foreign land under current circumstances.