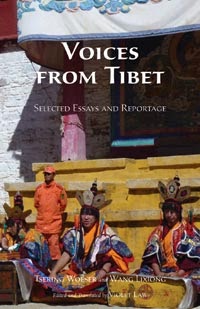 Tsering Woeser and Wang Lixiong are widely regarded as the most lucid, insightful writers on contemporary Tibet. Their reportage on the economic exploitation, environmental degradation, cultural destruction and political subjugation that plague the increasingly Han Chinese-dominated Tibet Autonomous Region (TAR) is as powerful as it is profound, ardent and analytical in equal measure, and not in the least bit ideological.

Voices from Tibet assembles essays and reportage in translation that capture many facets of the upheavals wrought by a rising China upon a sacred land and its pious people. With the TAR in a virtual lockdown after the 2008 unrest, this book sheds important light on the simmering frustrations that touched off the unrest and Beijing's relentless control tactics in its wake. The authors also interrogate long-standing assumptions about the Tibetans' political future.

Woeser's and Wang's writings represent a rare Chinese view sympathetic to Tibetan causes. Their powerful testimony should resonate in many places confronting threats of cultural subjugation and economic domination by an external power.

Having discovered her Tibetan heritage as a young adult, journalist-poet Tsering Woeser (唯色) now occupies a unique position as chronicler of modern Tibetan memory. Her writings are widely regarded as the voice of Tibet. Woeser received the Prince Claus Prize in 2011 for her compelling blend of literary quality and political reportage, as well as the International Women of Courage award by the US Department of State in 2013.

World-renowned as a most vocal, vigilant observer of Chinese-Tibetan relations and ethnic minorities issues within China, Wang Lixiong (王力雄) was recognized with the Freedom of Expression Award from the Independent Chinese PEN Association. Wang’s works are widely considered some of the most authoritative and balanced on Tibetan issues by a native Chinese writer.

Both are frequent commentators on Radio Free Asia.

Violet S. Law is an American translator of Chinese non-fiction.

"Violet S. Law's fluid translations of Woeser and Wang Lixiong's powerful and deeply humane writings, combined with Robert Barnett's insightful and elegantly crafted introduction, make for an extraordinarily effective volume. Voices from Tibet is a must-read for anyone eager to learn more about the Tibetan people and their struggles."

—Jeffrey Wasserstrom, author of China in the 21st Century

"These essays and dispatches provide an eloquent and unfiltered glimpse into how the ruling Communist Party has transformed the Tibetan plateau through decades of heavy-handed policies."