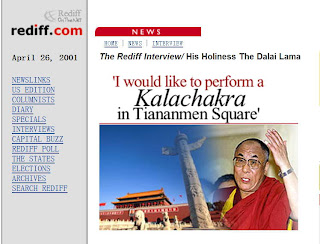 In this old interview with the Dalai Lama for Rediff.com, he speaks of the 17-Point Agreement. Ten years later (it was in April 2001), it makes interesting reading.
The entire interview is available on Rediff.com's website.

On the 17-Point Agreement
Your Holiness, fifty years ago, in May 1951, your government was forced by China to sign an agreement known as the '17 Point Agreement'. In this agreement it was stated that Tibet was part of China, but your government could retain a very large internal autonomy. Looking back, do you think that things could have been different?

From the late 1950s, till now, let us say for the past 45 years, whether there was a 17 Point Agreement or not, it made no difference. The agreement has not been relevant. I should put this way, as a result of signing the 17 Point Agreement, for few years, Tibet enjoyed some benefits in the sense that a certain autonomy in our way of life (for example in the fields of culture, religion) was granted. It was guaranteed by the agreement.
Later, in the late fifties, all these guarantees were disregarded and the agreement became worthless.
I want to further clarify that when the Tibetan delegation was negotiating in Beijing they were reluctant to sign, but the Chinese told them clearly: "If you do not sign, it is very easy for us, we just have to give a signal to the army and the army will march into Tibet."
For us it would have been worse. It is clear, there were only two choices: either to accept the agreement or to go through what they called a military 'liberation'.
For some years, we derived some benefit, but later, it became plain military occupation.

Though on paper you were granted a wide autonomy which gave you control over culture, religion, education etc.. the terms of the agreement were not implemented by the Chinese and you lost your autonomy.
Now, let us come to today's situation. You are asking for 'genuine autonomy', is it different from what you got (on paper) from the Chinese government in 1951?

It is the same principle, it is the same spirit. Usually I described what we want as "one country, two systems'. But there is a big difference: In the 17 Point Agreement, there were some clauses about the status of the Dalai Lama's institution. (According to these clauses, the Dalai Lama was able to retain his status and power within an autonomous Tibet).
Today, I am not demanding anything for the Dalai Lama. I do not want any special status.

In the event of an agreement, are you confident that this time the Chinese will keep their word?

Today, I am only asking for the Tibetans -- that they should have full power in the fields where they are capable of managing their own affairs.
In these fields, they should be given full authority. In the case of defence or foreign affairs, the Chinese can manage (our affairs). We are not asking for a separation (from China), therefore logically they could handle matters like defence.
About the guarantees, in 1950 Tibet was very isolated, Tibet was not very well known to the outside world. Today, everybody knows about Tibet. Any agreement will have the world community as a witness, that is a guarantee. There will be an universal awareness about the agreement and I also believe in the international concern for justice and rightfulness; all this added, can give us a guarantee.
I think it will be difficult to have to have a third party (as a guarantor).

Theoretically speaking, yes, it should be, because Tibet has a long border with India. Traditionally, that has happened in the past. But practically today things are very complicated, so I do not know.
发帖者 Tsering Woeser 时间： 00:50