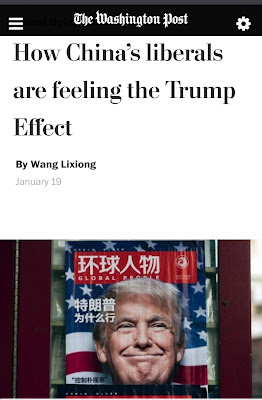 How China’s liberals are feeling the Trump Effect

Chinese like me — pro-democracy liberals — have been pushing for years to end the one-party dictatorship in our country. Most of us long regarded the U.S. political system as a model. Now, with the presidential election of Donald Trump, a man whose grasp of both democratic concepts and ethical norms is questionable, we have been forced to ask some hard new questions.

Our first reaction to the unsettling news was to shift our gaze to aspects of the U.S. system other than its presidential elections. We comforted ourselves by noting that the constitutional separation of powers can buffer the effects of an erratic president, that U.S. civil society remains strong and independent, and that another election will come along in four years.

But just as we were trying to adjust, Trump surprised us. He accepted a phone call from Tsai Ing-wen, the president of democratic Taiwan, and rejected Chinese government complaints about doing so. He brought in advisers who seem ready to take a harder line with Beijing. All of this suddenly made it seem that Trump might be good for Chinese democracy. Some of my fellow liberals have gone so far as to hope that Trump’s flirtation with Russian President Vladimir Putin might signal that he is thinking about aligning with Russia in opposition to China’s rulers — rather as President Richard Nixon, four decades ago, sided with Mao Zedong against the Kremlin. These friends hope that such pressure might contribute to a collapse of China’s authoritarian rule, just as the Soviet regime collapsed.

Personally, I am agnostic about Trump’s private thoughts, and I feel that my liberal friends in China make a mistake when they invest their hopes in the unseen motives of a leader-in-waiting.  In recent decades, we watched several times as new strongmen rose in Beijing; in each case we hoped they would loosen the system, and each time we were disappointed.

There is, moreover, the deeper question of what kind of democracy China might adopt, should that become possible. In the case of the Soviet Union, the transition from communist rule was made easier by a provision in the Soviet constitution that allowed constituent republics to secede. As long as the Soviets were in power, that provision was mere window dressing, but when the regime collapsed it provided the legitimacy under which Ukraine, Belarus, Kazakhstan and other former Soviet republics could go their separate ways. China’s constitution, by contrast, insists on national unity, and within that unity the communist regime has annihilated every conceivable rival source of national organization. People fear that if the regime falls, society might collapse as well. The rulers are, in effect, saying, Keep us, or all hell will break loose. The claim has a certain plausibility, and the Communist Party uses it to take daily life hostage.

Chinese liberals who hope Trump might assist in bringing down communist rule in China do not want national dissolution or societal collapse. Such results would be disastrous not just for China but for the rest of the world. The crucial problem, therefore, is to find a way to “rescue the hostage,” as we say — to keep society on its feet during a democratic transition.

Here, too, worries over the rise of Trump become relevant. If the United States, a model for democracy in the world, can elect a Trump, why wouldn’t such a result be even more likely in China, where popular education in civic values and in the nation’s history is much weaker? Fifty years ago, Mao brought immeasurable disaster to China, but today, after years of Communist Party work to erase history and stimulate nationalism, Mao, in the popular Chinese imagination, is regarded as a hero. If Mao were to stand for election in China today, he would win in a landslide.

In the United States, Trump will have to work within a mature system of checks and balances and will have to step down in either four years or eight. A Chinese Trump, on the other hand, would almost certainly turn into a Chinese Putin. It would not be surprising to see the Han Chinese, who make up more than 90 percent of the population, use democracy to suppress ethnic minorities, to launch an attack on Taiwan, or to bully Hong Kong. It is not beyond imagination that a Trump-style stimulation of popular passions in China could lead by democratic vote to support for launching a war on the United States.

The main question that the U.S. election leaves with Chinese liberals is how to build a system that can avoid a Chinese version of the Trump phenomenon.

Wang Lixiong is the author of the novel “Yellow Peril.”

Translated from Chinese by Perry Link.