The first recent self-immolation I know of occurred in 1997 in New Delhi—the elderly Tibetan ex-monk Thupten Ngodrup immolated his body in protest after the Indian police broke up his hunger strike by dragging him and other strikers off to receive intravenous force-feeding in a hospital. His Holiness the Dalai Lama was on his way to the U.S. at the time, but he got to the hospital where the bandage-mummified Ngodrup was lying, barely conscious, in the process of dying from the burns. His Holiness told me he whispered to Ngodrup, “Alright! You’ve made your appeal for freedom, which we wish you hadn’t, but it’s done now. But please, do not die now holding any hatred in your heart for the Chinese. Focus on your compassion for all beings!” His Holiness said that the dying man somehow made a nod of agreement and soon passed away. The Dalai Lama went on to say that he was very worried about the act. Again, when the more recent wave of immolations began in Tibet, the Dalai Lama deplored them, saying they were tragic and not effective. But he said he couldn’t condemn those who had done it but rather only pray that the intentions behind their acts were based on compassion, not anger and hatred. 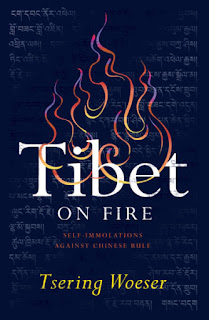 Self Immolations Against Chinese Rule

By Tsering Woeser; Cover art by Ai Weiwei
Verso 2016, 128 pp., $16.95
In Tibet on Fire, Tsering Woeser, a Tibetan–Chinese resident of Beijing, offers trenchant analysis of the phenomenon of self-immolation as protest. The author, who has worked tirelessly on behalf of the Tibetan people, is a being of great hope whose love encompasses the suffering people on the Tibetan plateau. Her writing is itself an act of heroism, as she risks retaliation from the Chinese Communist Party (CCP), which is futilely attempting the ethnicide of the Tibetan “minority nationality.”
Woeser is helped in this book by the great artist Ai Weiwei, who created the cover. In the acknowledgements, she quotes his strong Twitter statement: “Tibet is the most serious test for today’s China and for the international community’s standards of human rights and justice. There is no dodging this test, and there is no getting around it. And thus far, everyone should be disgraced and ashamed at the results.”
Woeser’s main thesis in Tibet on Fire is that self-immolations are extraordinary acts of political protest—powerful, self-sacrificing outcries to call the world’s attention to the unbearable level of oppression crushing down on the Tibetan people by the CCP dictatorship. She defends the immolators against the spurious charges by CCP propagandists that they are “terrorists” or neurotic fanatics manipulated into their horrific acts by the “Dalai clique” to make negative propaganda against China. She refutes conclusively the CCP propaganda that China “liberated” Tibet, beneficially “developed” Tibet, and has made Tibetans happy members of the Chinese “motherland.” She vividly describes the overwhelming oppression of the Chinese military occupation, industrial-strength colonial exploitation, environmental degradation, cultural suppression, and virtual imprisonment of what the CCP leadership labels the “backward,” “seditious,” and “ungrateful” Tibetan people.
In the opening chapter, “Why Are Tibetans Self-Immolating?” Woeser quotes Kirti Rinpoche, abbot in exile of the Kirti Monastery in Amdo Province, in testimony before the Tom Lantos Human Rights Commission of the U.S. Congress: “There is no greater expression of their desperate opposition to the Chinese government than by resorting to the most powerful method of a nonviolent movement, which is by refraining from causing any harm to the Chinese people and appealing to the Chinese government, than by setting themselves on fire.” Woeser further elaborates that “self-immolation is not suicide, and it is not a gesture of despair. Rather, self-immolation is sacrifice for a greater cause and an attempt to press for change.”
Woeser offers insights that for many may be surprising. Tibetans in Tibet are not, she points out, primarily seeking international support; rather, these protests are intended to reinforce national identity and unity and express the spiritual strength of the Tibetan people. Tibetan independence and preservation of the Tibetan language are central concerns. She also makes clear that while self-immolation is certainly a form of protest against the state, it is more than that—it is also meant to be understood as a religious offering.
Woeser also chronicles in rich and moving detail the outrageous activities of the CCP organs of propaganda media and police state enforcement, showing how the party hard-line bureaucrats, some of whom she mentions by name, are using the immolations as an excuse to crack down even harder on Tibetans while also trying to prevent news of the “human freedom torches” from reaching the people of Tibet, China, and the larger world.
The most important point Woeser makes is that the blame for these tragic outcomes—150-plus human lives freely and painfully given away for their cause—rests squarely on the oppressive policies and practices of the CCP-controlled occupation apparatus. Buddhism is not causing it, the Dalai Lama is not causing it, no clique or group is organizing it, neurotic delusions are not causing it—the CCP-directed ecocide and ethnicide, now even escalated into a classic colonialist genocide, is the sole cause of these immolations.
In her conclusion, Woeser questions the very term “self-immolation,” saying it makes people think of it as suicide, an act against the self. She brilliantly articulates the point from which our understanding of self-immolation must begin:

Self-immolators employ an extreme form of suffering, unbearable for the average person, so as to embody the most powerful form of protest and recapture their human dignity. …It is a pain that most cannot even bear to imagine, much less experience. And while I certainly do not encourage anyone to self-immolate, I do ask that we be brave enough to face the reality of this act directly when it occurs. In doing so, we can see the simultaneous heroism and tragedy of these acts, as protestors employ their own bodies in their struggle against a colossal, tyrannical machine.

Within the Buddhist world, there are mixed reactions to the acts of these Tibetan heroes. Many, in shock, think such thoughts as It is just plain awful, insane, un-Buddhist, a form of suicide, and even It is irreparably harmful to the Tibetan cause. Woeser indirectly responds to this way of mentally looking away from the “reality of the act” by citing the Venerable Thich Nhat Hanh, who defended the self-immolation of the Vietnamese monks in the sixties:

What the monks said in the letters they left before burning themselves [was that they] aimed only at alarming, at moving the hearts of the oppressors, and at calling the attention of the world to the suffering endured then by the Vietnamese. To burn oneself by fire is to prove that what one is saying is of the utmost importance… To express will by burning oneself, therefore, is not to commit an act of destruction but to perform an act of construction, i.e., to suffer and to die for the sake of one’s people. This is not suicide.

Woeser doesn’t take this Buddhist appreciation of the heroic act of self-immolation further, as her focus is on the element of protest involved in the unprecedented Tibetan cases. In a way, she is constrained from doing so, the same way His Holiness the Dalai Lama is.
In Buddhist history, there have been immolations resulting from both sadness and joy. When Shakyamuni Buddha left his body in the act of “total nirvana” (parinirvana), a number of the fully attained arhat–saints spontaneously combusted themselves in their grief at the loss of the presence of the Buddha. Mahakashyapa had to exercise his authority as successor head of the sangha to forbid others from doing the same, as they were needed to collect the teachings and to help the ongoing community. Then, in the Mahayana White Lotus Sutra, there is the story of the mythic bodhisattva Bhaishajya Raja, who burned his body as a lamp of offering to the Buddha who was his teacher, an act of pure joy and self-transcendence from which act he gains extraordinary accomplishments.
The Tibetan Buddhists, monks, nuns, lay men and women who have offered their bodies to the flames are fully aware of these traditions. From their perspective, they are not committing “suicide” (literally, “self-killing”) because they consider their “selves” to be more than their bodies; by committing such heroic acts of generosity, they are taking a huge evolutionary step of sending their subtle mindstream,samtana, (not their coarse personality mind) into a space of exalted freedom, whence they can assume another, better body. In fact, the Tibetan expression for the act is, literally, “burning one’s body with fire” or “offering one’s body in fire,” not “burning one’s self.” This is of course very hard for materialists, communist or capitalist, to understand; if one is convinced that the “self” is nothing but the body, then voluntarily giving up the body in extreme pain can only be considered masochistic suicide.
Kirti Rinpoche called such immolation “the most powerful method of a nonviolent movement.” Woeser’s book calls on us to realize just that and not to hide from its power by clinging to some mental notion that deprecates the courage of these yogis and yoginis of fierce freedom.
In a world so given over to violence and destructive consumption, these immolators are the heroes and heroines who offer to us all the vision of their determination that no one can conquer others, that harming another is harming oneself, that domination of others is self-enslavement, and that their loving nonviolence is ultimately more powerful than lethal violence. Woeser’s marvelous book honors them beautifully—as does Ai Weiwei’s elegant cover, black with embossed names of the immolators in Tibetan letters and Tibetan thangka-style flames emerging from the word Tibet. The physical book itself imparts a powerful experience.
In her conclusion to Tibet on Fire, Woeser leaves us with this: “Memories are intertwined with these flames. The heroes who have sacrificed themselves to the flames will remain with us as long as we cherish their memory. I join my hands in prayer for my compatriots who have committed these painful acts of sacrifice. I hold them, their memories, and their aspirations in the deepest and most profound respect, now and forever.”