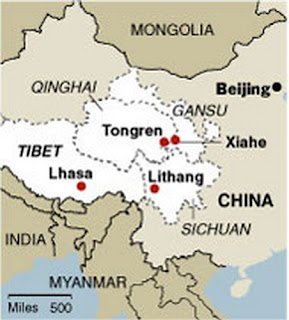 BEIJING — Chinese officials have significantly increased security forces across Tibet in the face of a grass-roots movement to boycott festivities during the coming Tibetan New Year, according to residents of the region and recent visitors. The movement aims to use the holiday period to mourn Tibetans who were killed during the government crackdown last March and express concern for those arrested or tortured.


The increased forces have been seen in at least four crucial areas of the vast Tibetan region: Lhasa, the capital; Xiahe, a town in Gansu Province that is home to a large and restive monastery; Tongren, a monastery town in Qinghai Province; and Lithang, a town in Sichuan Province that has been locked down this week.

The problems in Lithang stemmed from a single person’s protest on Sunday, according to residents and the Free Tibet Campaign, an advocacy group in London. A monk, Lobsang Lhundup, 37, shouted slogans from a street corner supporting the Dalai Lama and calling for a New Year’s boycott, the group said. The next day, hundreds of Tibetans took to the streets to demand the monk’s release; riot police officers broke up the protest and arrested about 20 people.

On Tuesday, the government ordered shops and hotels to shut down for three days, several residents said by telephone. A young woman, who asked not to be named for her safety, said, “Shops have all closed, and people do not dare to go out.”

Local security officers declined to comment when asked about the episode over the telephone.

The campaign for the boycott of Losar, the Tibetan New Year, has spread via text and e-mail messages and fliers. The holiday begins next Wednesday.

Last March, Tibetans angry over China’s policies in Tibet and the suppression of peaceful protests rioted in Lhasa, leading to widespread damage and the deaths of at least 18 civilians and one police officer, according to the official Xinhua news agency. Protests flared up in other regions, and exile groups said hundreds of Tibetans were killed in the ensuing crackdown.

The call for a boycott began several months ago and has gained traction among younger Tibetans as well as intellectuals and dissidents. It has been endorsed by overseas Tibetans, including the government in exile in Dharamsala, India.

“It’s deeply connected with Tibetan culture, the idea that after such a horrible year filled with death, how can we celebrate?” Woeser, a popular Tibetan blogger, said in an interview. “Instead, it should be a memorial.”

The Chinese government is also fearful of unrest in the region next month, on the 50th anniversary of the Dalai Lama’s flight to exile in India after a failed rebellion against Chinese control, a date of great moment to Tibetans. The Dalai Lama, revered by many Tibetans, advocates greater autonomy for Tibet. But the Chinese government vilifies him as a “splittist,” and says he ruled over a feudal slave-holding society. In a move that antagonized many Tibetans this winter, the government declared March 28 to be Serf Emancipation Day.

The issue of Tibet is already emerging as a delicate one between the Obama administration and Beijing. Secretary of State Hillary Rodham Clinton, who is scheduled to visit China this week, said in a speech before the trip that Beijing should ensure religious freedom for Tibetans.

Foreign reporters are not allowed to visit Lhasa and central Tibet unless invited by the Chinese government.

A Chinese Foreign Ministry spokeswoman said last week that “the situation in Tibet is stable.” But a monk from Lhasa, reached by phone, said, “There are a lot of soldiers and People’s Armed Police in the streets,” referring to China’s main paramilitary force. Like almost all the people interviewed for this article, the monk agreed to speak only on the condition of anonymity for fear of government reprisals.

The monk said he, like thousands of other monks, had not been allowed to return to his monastery after being imprisoned for several months last year after the March uprising. Many of the main monasteries are being emptied out, he said. There are only about 400 monks now in the Drepung Monastery in Lhasa, he said, a small fraction of the number before the uprising.

The monks are still being forced to take “patriotic education” classes that have been going on in many monasteries since the March protests, he added. As a result, the monks study Chinese law rather than Buddhist scriptures and are told to denounce the Dalai Lama.

Monks no longer in the monasteries are barred from wearing their robes in public, the monk said, and the police check on the monks at home, at times hauling some off to prison. The monk said Tibetan policemen came to his home three times a month.

“They ask, ‘Where have you been?’ ” he said. “ ‘Have you been out? What are Tibetans talking about in the society? Have you met with friends who are in prison?’ ”

The monk said many Tibetans in Lhasa were talking of joining the boycott. But he said that Chinese officials were urging the Tibetans to carry on with festivities and were even offering them money to do so.

Farther east, in Gansu Province, the authorities have declared the town of Xiahe, the site of the Labrang Monastery, off limits to foreigners. Labrang is considered one of the greatest centers of learning in the Tibetan world, and it was a locus of protests last year.

A local tourism official said the area around Labrang was closed to foreigners until late March. Two French television journalists who secretly stayed in the town two nights in early February said they had to sneak past two checkpoints. They said they saw soldiers, police officers and paramilitary troops everywhere.

“There was an open plaza, and it was full of People’s Armed Police with black uniforms, helmets and shields,” said one, Charlotte Cailliez. “On the main street, there were police cars going back and forth.”

To the west, in the town of Tongren, known to Tibetans as Rebkong, police and paramilitary forces were scarce during the day but came out in force at night, said a local Tibetan man.

There, the call for a boycott on festivities not only pertains to Losar, but also included the recent Chinese New Year, which many Tibetans in Rebkong celebrated in past years. Normally, the town would convulse in singing, dancing and pyrotechnics during the two-week holiday. But this year, few Tibetans participated.

Local officials handed out hundreds of dollars to people to buy fireworks, the man said.

But the Tibetans practiced restraint. In the main temple compound, he said, worshipers lighted yak butter lamps, and “the mood was very, very quiet and solemn.” 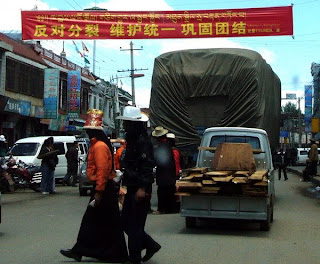 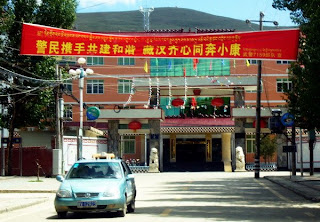 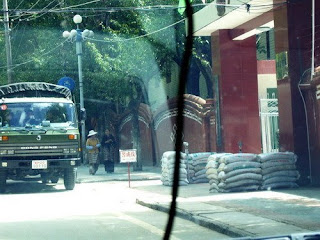 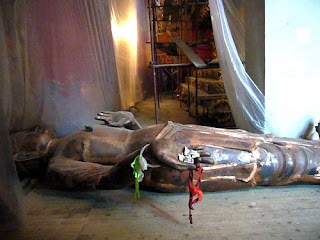